Eight years after its initial release, Playtech’s Hot Gems mining themed game has been given a thorough upgrade. Hot Gems Xtreme takes the base elements of the original (symbols, setting, free spins, collapsing reels), and takes them to a whole new level. Playing very much like Elk Studios ‘Gold’ series of slots, Hot Gems Xtreme benefits from expanding reels, hundreds of thousands of paylines, and a whole host of reel modifiers.

How to Win Big in Hot Gems Xtreme – Free Spins

Land 3, 4, 5, or 6+ bonus scatters for 10, 12, 18, or 25 free spins. Starting on a 6x4 reel set, each winning combination reveals a new row of symbols up to 8 rows from the original 4. During free spins, each new row revealed is safe for the remainder of the bonus round and will never drop back to the minimum 4 rows. Land 3 bonus scatters during the bonus round adds a further 3 free spins. All the game’s special features (listed below) are available during free spins, as well as in the base game.

Starting with a 6x4 reel set, any winning combo triggers Playtech’s Ways Boost feature, whereby a brand new row tumbles down on top of the existing symbols thus increasing the ways to win. Consecutive wins continue to add rows up to a maximum of 8. Using the Ways to Win mechanic which creates winning combos from matching symbols anywhere on adjacent reels from the leftmost reel, a full 6x8 board offers 262,144 ways to win (8x8x8x8x8x8).

Winning combos explode, with the empty spaces filled by symbols collapsing from above. Collapsing symbols which create new winning combos help continue the spin as they also explode. Once again symbols collapse from above to fill the voids. This cycle continues until no further wins are created. In the base game, additional rows created by consecutive wins disappear after a non-winning spin and reset to 4. During free spins, each new row is held in place until the end of the round.

TNT symbols which appear on the reels explode wherever they land and take with them all adjacent symbols (apart from special symbols and Big Symbols). The resulting hole in the symbol wall is filled by collapsing symbols from above.

Occasionally 2x2 or 3x3 ‘Big Symbols’ will appear during a spin. Big symbols crush all smaller regular symbols beneath them as they head towards the bottom of the board.

Fireball symbols are known as ‘Walking Mystery’ symbols. Upon landing, the mystery symbol clones itself whilst moving, one step at a time, around the board. When it finally comes to rest, all the fireball symbols left in its wake transform randomly into one of the regular symbols from reel 1. If a walking mystery is deposited on reel 1, another random regular symbol is chosen as the mystery symbol.

Hot Gems has exceeded its predecessor in every way. Although using the same basic colour palette and symbols, the design has improved vastly. Set in a cartoon diamond mine, the artwork is superb. The rocky interior comes with wooden scaffolds and ladders, gas lanterns, and plenty of gleaming gold, crystals, and gems. The reel set sits atop a wooden beam which is suspended on either side by rope.

There are 12 regular symbols with 8 gemstones as the low value symbols and a lantern, pickaxe, chest of jewels, and an old miner as the highs. The miner is the highest value symbol, with 6 adjacent symbols awarding 3.75x the bet size. The full paytable can be seen below. Divide the indicated total of any win by 20 to arrive at the respective win multiplier amount. 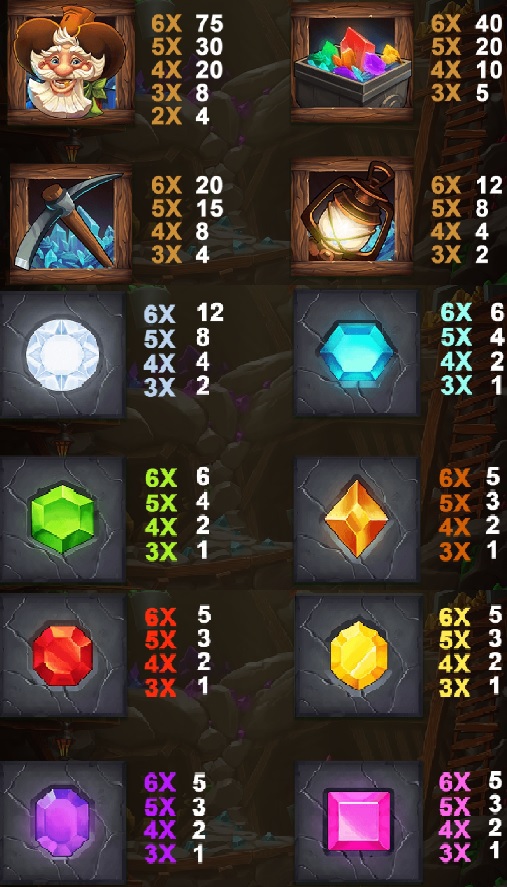 The special symbols are the bonus scatter, the diamond wild, TNT sticks, and the fireball mystery wild.

Although, as briefly touched upon, Hot Gems Xtreme is very reminiscent of games in the Elk Studios ‘Gold’ series, this doesn’t detract from its overall appeal. An abundance of reel modifiers keep the (albeit usually small) wins rolling in and the engagement levels high. Big wins are there to be had in both the base and bonus games. In the base game, the Walking Mystery feature netted us some pretty tidy scores, and the potential in the free spins round is awesome.

This is a solid offering from Playtech; great potential with plenty of oomph combined with enjoyable gameplay and a wealth of features.