The game is based on the classical, Norwegian masterpiece by the same name; "In the Hall of the Mountain King" by Edvard Hagerup Grieg (born June 15th 1843, dead September 4th, 1907). Grieg was a Norwegian national romantic composer and pianist.

Quickspin has done a great job with the design and graphics in this slot and this has been quite the ambitious project. Players will be pulled into the magical and mystical world of Hall of the Mountain King. The game is set in the lands of the north, giving us a feeling of being somewhere in between Lord of the Rings and Game of Thrones.

Players will be joined by some royal trolls and during the main game, all the action will take place outdoors. Seeing a green hilltop as well as blue skies gives a great contrast to the sudden darkness that appears during the bonus rounds as players are taken to the cave of the mountain king.

The symbols on the reels include the classic card suit symbols ranging from A to 10. Quickspin has also created symbols to fit the game's theme, showing five different trolls with the mountain king being one of them. The mountain king symbol is also the most lucrative, giving 40 times your stake for five of a kind. The wild symbol of the slot will substitute all other symbols and has the same value as the mountain king symbol. 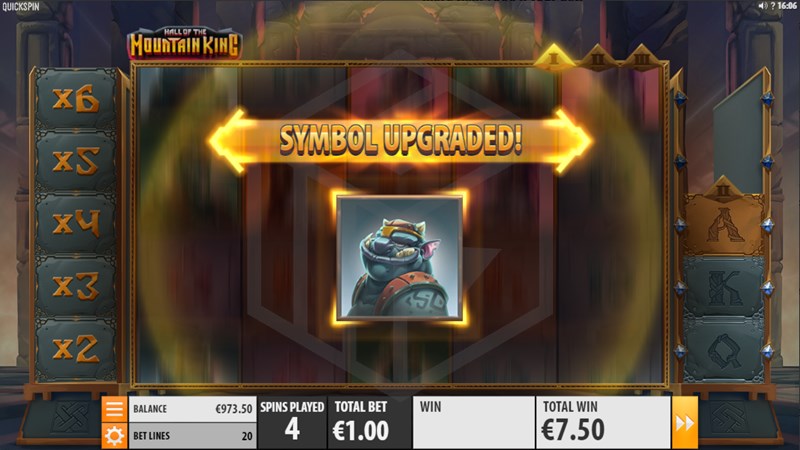 Hall of the Mountain King has plenty of fun features to look forward to outside of the main game. In fact, already during the main game players will be able to keep an eye on the Multiplier Meter which will be activated once one or several wild symbols appear. However, it is the Free Spins bonus round which is the most exciting feature and continues to intensify as you move through the three different levels.

Keep an eye on the Multiplier Meter which is found in the main game. This will get multiplied by the shown multiplier in the meter, which happens when wild symbols appear. With 1, 2, 3, 4 or 5 wild symbols visible, you will receive an x1, x2, x3, x4 or x5 multiplier. When wilds appear stacked on the reels, you can land wins of up to 4000x your stake in the main game. 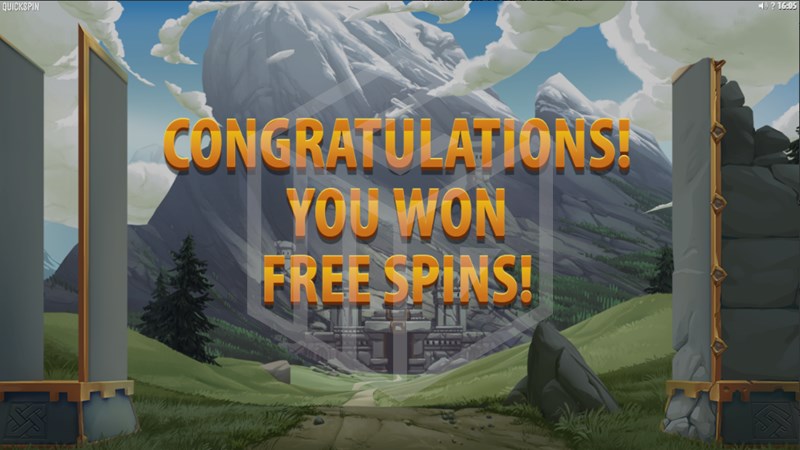 This is the main attraction in the game and has been separated into three separate levels. Each level comes with its own set of unique features and will be activated when you land 3 hammers (scatter symbols) on the middle reels during the main game.

In the first level, it's all about collecting as many symbols of high-value as possible. This can be done when landing a winning combination or by random. The troll will then smash one of the blocks found in the upgrade meter on the right side of the reels. The symbols of lower value will be removed and replaces with stacks of the corresponding high-value symbol

The troll can also smash the bottom block of the multiplier meter which will upgrade all multiplier values. These multipliers can go up to x15. You will reach the next level once the top block is destroyed.

Once in the second stage of the free spins feature, the goal will be to collect Whirling Wilds. The wilds that are locked inside a block will be collected once the trolls destroy it and will be held above the reels until later on. You will be able to collect up to 6 wilds.

The multiplier meter will still be in use during this level and as long as the troll keeps on smashing multiplier blocks, it will continue to upgrade. You will reach the next level once the top block is destroyed, just as in level 1.

The third and final stage brings you to the very end of the story of the Mountain King. You will be armed with whirling wilds and your upgraded symbols and will be able to see the collected features come together. During this level, you will receive 3 spins while the Whirling Wild Drop feature is activated and will help create winning combinations. During each of the 3 spins, a random amount of Whirling Wilds will be added to the reels.

Our Thoughts on Hall of the Mountain King 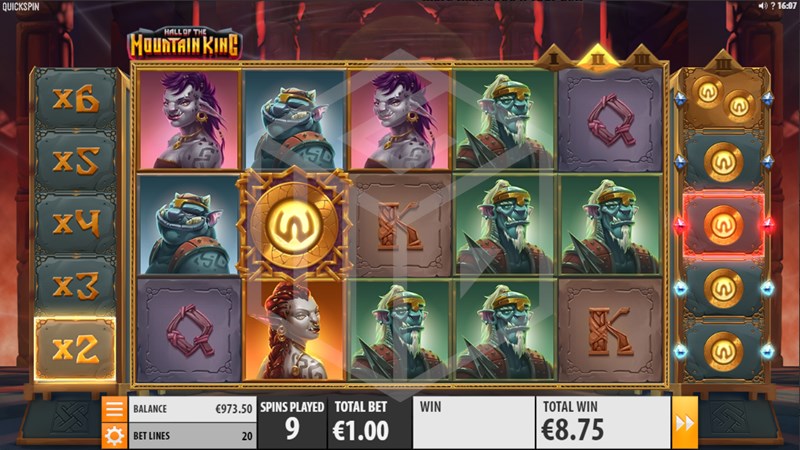 Just like many other slots from Quickspin, Hall of the Mountain King impresses with its great visual effects and graphics. The game provider has done a great job in creating a truly unique slot, possibly one of the most ambitious releases yet by Quickspin.

Mountain King can be slightly confusing when it comes to the bonus rounds. Perhaps players who prefer the slightly easier, laid-back kind of slots will find the whole game a little over the top. Those looking for a true modern gaming experience will find it highly entertaining.