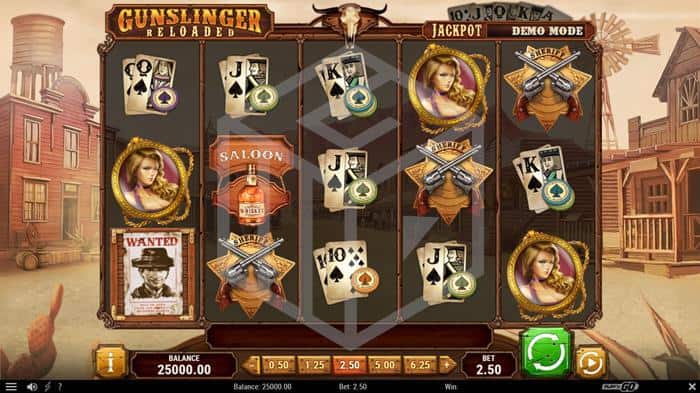 The Wild West is always a popular slot theme and Play‘n Go have certainly done it justice with Gunslinger: Reloaded. The transparent, wood-framed game board sits in front of a typical American Wild West town with its pallet wood buildings lining either side of a dusty street with a series of rocky outcrops in the distance. The graphics and animation are ably assisted by a typically Wild West type soundtrack.

The lower value symbols are the standard royal playing cards 10 through to Ace – although in this instance they are truly themed appropriate as they double as cards used in a poker game and one of the slot’s special features (but more of this later). The higher value symbols are represented by a two crossed pistols in front of a sheriff’s badge, a buxom barmaid, and the highest value regular symbol is a pan of gold nuggets spilling from a leather pouch. Five of those on any pay line will reward you with 40x your stake.

Gunslinger: Reloaded also has a variety of scatters and bonus symbols. The Bounty Hunter Wild is the most lucrative, with 5 on a pay line returning 400x your bet, with the White Horse scatter, which starts paying out for just 2 in a row, pays out 150x for 5 in a pay line. There is also a Whiskey Bottle scatter on the 3 middle reels which award you a free spin feature, and 3 Wanted Poster scatters on reels 1-3 which award a Bounty Hunt feature.

Play‘n Go have made sure to pack Gunslinger: Reloaded with plenty of features, meaning this medium variance slot is never a boring grind. As well as a free spin bonus there is also the Bounty Hunt feature, a Shoot the Cards feature and of course a progressive jackpot to play for. 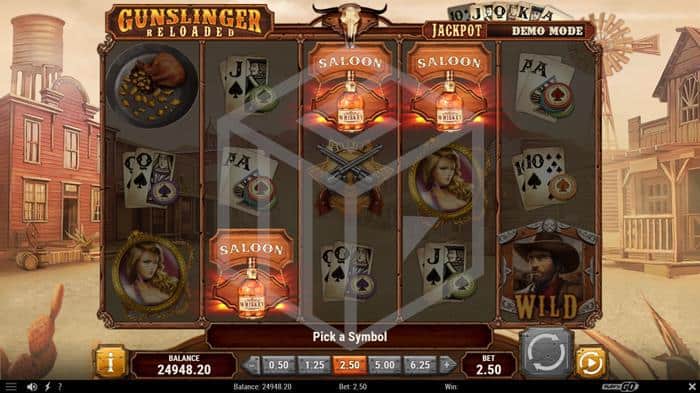 Land 3 Whiskey Bottles on reels 2, 3 and 4 and you’re off to the free spin bonus, but not until you’ve picked a bottle to shoot which will reveal between 10-25 free spins where all wins are doubled. Perhaps not as lucrative as your typical free spin round but with all wins doubled and the chance to re-trigger more spins a decent addition to the game nevertheless.

Wanted posters on reels 1, 2 and 3 will send you to the Bounty Hunt bonus. You pick from 3 outlaws, each with a different potential value, pick the highest value and you have a chance of winning up to 960x your stake – although the higher the possible win, the higher variance and you could end up with a relatively low win. In the feature you shoot bottles, pick a knife to throw and a stick of dynamite to detonate and each will reveal a value which will combine to reveal your win. You then pick where to aim to shoot your rival, and if you choose correctly then the more your accumulated wins will be multiplied. 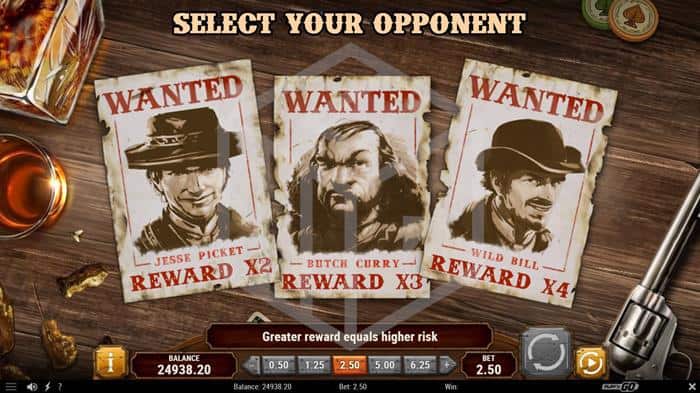 If through the course of your play, you make at least one win with each of the cards (10’s through to Aces) then you’ll fill the Royal Flush and you get the opportunity to ‘Shoot the Cards’. Shots are fired and five cards rain down, each showing coin values which will combine to give you a decent cash win. If you manage to shoot down 5 sheriff’s badges, however, you will the progressive jackpot which can be anything up to €500,000 depending on your stake. 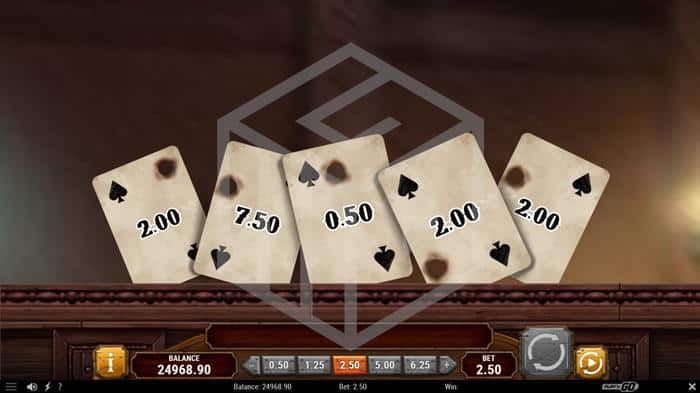 Our Thoughts on Gunslinger: Reloaded

Gunslinger: Reloaded marks a significant improvement on the original game by keeping the best of the original game and adding a lot more besides. The graphics are greatly improved and unlike the original, which is pc only, Gunslinger: Reloaded is available on all devices. The features are also stronger and Play‘n Go have done well to create a series of unique little features to keep the player engaged and interested. Add to this a progressive jackpot which, although not in the Mega Moolah leagues, will often pay out between €50,000-€100,000– and that’s not to be sniffed at. Great job Play ‘n Go!