Golden Ticket by Play'n GO released on 2014 is a 5-reel & 5-row online slot with cluster pay and a 96.73% RTP. This is a circus-themed game offering players a max win of up to 1000x their stake. Golden Ticket can be played on all devices from €0.2 to €40 per spin and is considered a low volatility game. 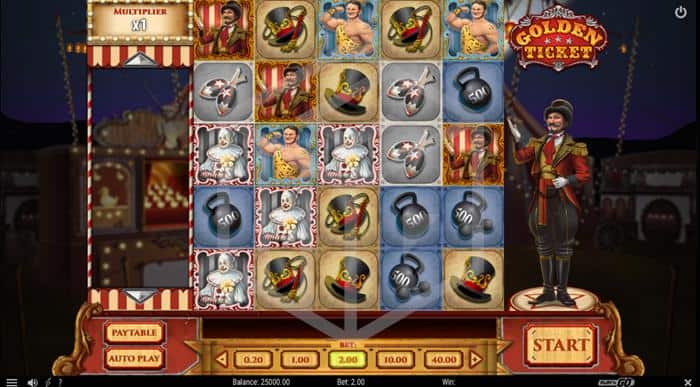 The design for Golden Ticket is superb. Themed around a Victorian-era circus featuring leopard skin-wearing moustachioed strongmen, scary looking clowns, sideshow stalls and games, Golden Ticket brings all the fun of the fair to this atmospheric slot. Either side of the square grid of a game board you can see the big top, and to the immediate right of the game board will be standing an animated version of either a strongman, a clown, or a ringmaster – as these are also all symbols from the game then each time one of these symbols lands a win for you then the character to the right of the board will change accordingly. All the while a suitably jolly funfair type ditty plays to accompany proceedings nicely.

The key to winning big in Golden Ticket is getting a good run with the cascading reels feature which accompanies every spin. This will not only lead to your best base game wins but it is also the only way to reach the bonus round. 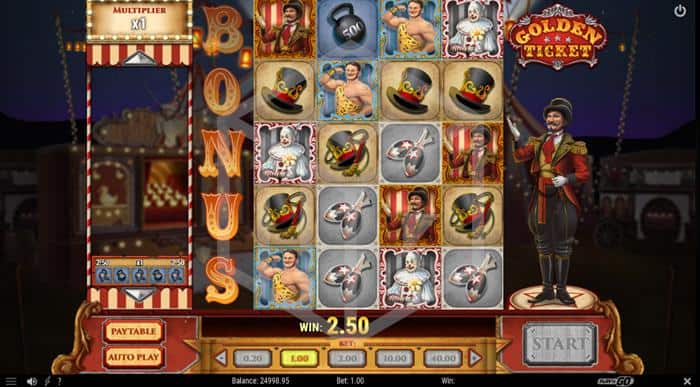 Plenty of slots operate using the cascading reels mechanic. Essentially as soon as a win lands, all the winning symbols disappear and the remaining symbols above cascade down to fill the gaps left behind. If the new combination of symbols results in another win then the same will happen again until such time as no new win falls into place. However, in most cascading reels slots the symbols which have disappeared will be replaced with new ones cascading from above the reels but this isn’t the case with Golden Ticket. In this game, the idea is actually to empty the reels and as only one symbol in each win is replaced. The middle symbol of every win is replaced with a Golden Ticket Wild which stays in place, making it much more likely you’ll land subsequent wins. Also, when you land a win a multiplier will be added which you’ll see as the empty panel to the left of the game board starts to fill up. If you go on to land a second win then another multiplier is added. This will continue until that particular winning streak comes to an end. If you manage to land your wins in just the right way you could make a huge win as if 5 Golden Tickets land in a row you’ll win 500x your bet size. If you somehow manage to empty the entire 5x5 grid then you’ll be awarded a win of 1000x your bet size. 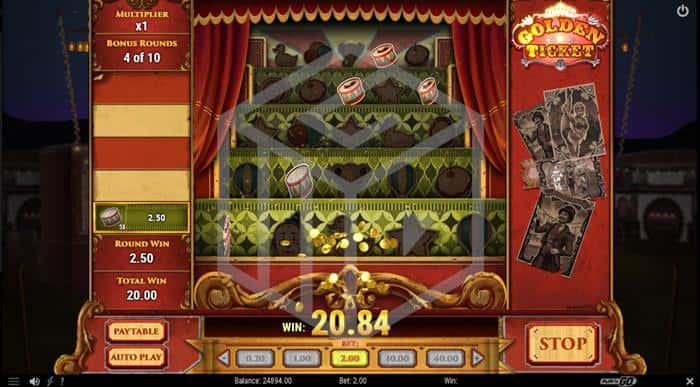 As mentioned earlier, you will also need the cascading reels to work in your favour in order to get into the bonus round. In the small delay between ending one spin and starting the next, the game board will be temporarily empty whereupon you may see the word “BONUS” spelled out vertically downwards behind one or more of the reels. To start the bonus round you must land a win and then enough subsequent wins that one of the reels which has the word BONUS behind it is fully revealed. Once it does then you’re off to the bound round.

The bonus round sees you transported to a circus fairground stall where rows of circus-related symbols (lions, clowns, targets, elephants, balloons, drums etc.) will flip up with each one of the 10 bonus rounds you are awarded. If you land five or more of any identical symbols you’ll win a cash prize. There are way too many to go through but the highest paying is the clown who pays 5x your stake for 5 appearances up to 175x if 10 appear. If you land five or more big top symbols you’ll receive additional rounds up to a maximum of 20. If you managed to reveal 2 BONUS’s at the same time before entering the bonus round all your winnings with be multiplied by 2 (and so on and so forth)

Our Thoughts on Golden Ticket

This is a fine game, especially as I’m reviewing it well over 4 years after its release. It still feels as fresh and innovative as it did at the time. The game within a game (ie: trying to clear the board as well as to land wins) makes it a thoroughly immersive gaming experience as you’re always trying to figure out what you need to get into the bonus round, or how many multipliers your next win might have, or whether those 3 Golden Tickets are going to combine at some point.

It’s not a game for the serious high volatility player to be honest. Although Play ‘n Go label it of medium volatility I just couldn’t see it. At most I’d say low/medium, and this is fine. For players who are not so happy to take big risks, you can play this game for hours without losing too much, and it offers enough of a game to keep you interested. Good job Play n Go.