Released by Microgaming back in December 2014 Game of Thrones is an enduringly popular slot based on the multi-award winning HBO fantasy drama series which itself is based on ‘A Song of Ice and Fire’ George R.R. Martin’s series of fantasy novels. Game of Thrones largely centres around four dynastic noble families (Baratheon, Lannister, Stark, and Targaryen) either vying to claim Iron Throne of the Seven Kingdoms or seeking independence from it.

Microgaming actually released two versions of the same game, visually identical and with the exact same features but one has 15 pay lines and the other works off a 243 ways to pay mechanic. We’ll focus on the more popular 243 ways to pay version. 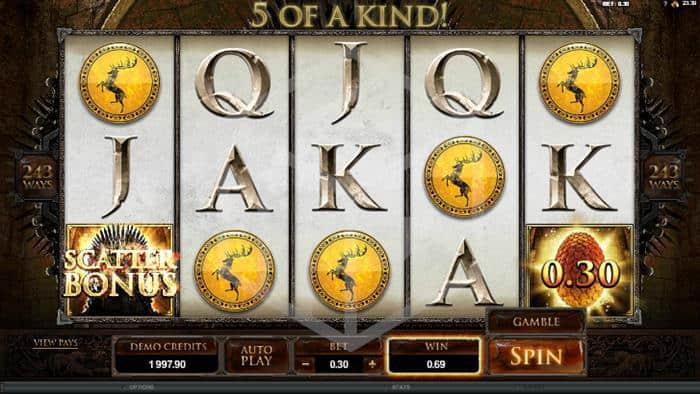 The design of the game with Iron spikes either side of the iron-framed game board is reminiscent of the Iron Throne, with the bleak, dark stone wall behind setting an ominous tone familiar to anyone who has watched TV series. The game board itself sees the symbols appearing on a white background while the familiar series music accompanies proceedings.

There is a gamble feature which can be used on any win in the base game or the bonus game as well as a scatter win for landing 2 scatters, and a free spin round for landing 3 or more scatters. 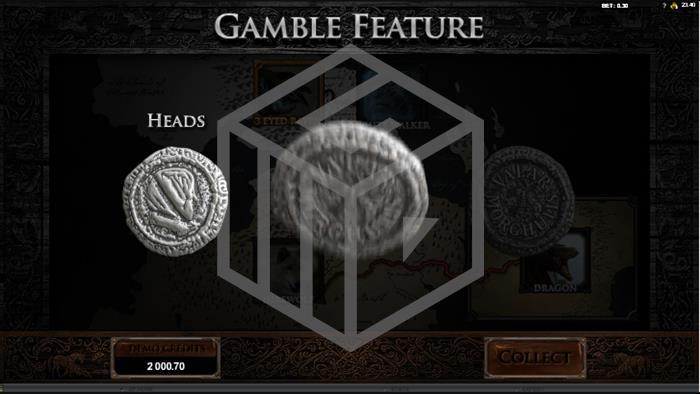 Land any win either in the base game or the free spin round (although only at the conclusion of the free spins round) and you get the option to hit the ‘Gamble’ button. You’ll then be taken to another screen where you choose heads or tails of a silver coin which will spin to either double your win or take your winnings. Each time you win a video clip from the series will play as your progress along the gamble path through the kingdoms of Westeros and Essos up to a maximum of 4 double-ups.

If you land 2 scatter symbols then you’ll be awarded a random cash win which you can then choose to collect or gamble.

Land 3 or more scatter symbols and you’re off to the free spins bonus round where you first must choose which of the four House’s you wish to pledge allegiance to, with each house awarding a different combination of free spins, win multipliers, and different height symbol stacks for the House seal. The choices are as follows:

It is possible to retrigger the entire free spin feature from within the free spins. 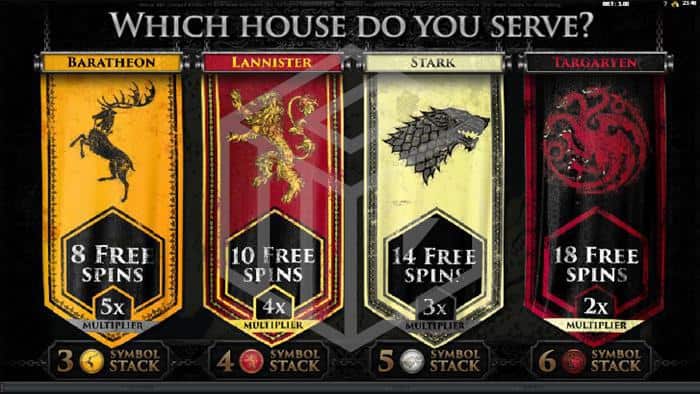 Our Thoughts on Game of Thrones

At the time of writing, Game of Thrones is now over four years old and yet it is still among the most popular Microgaming slots on the market. The theme works well and the features come just about often enough to keep you interested – never an easy task for a higher variance game. The choice of free spins is a nice touch and gives the gamblers a chance to really go for it while allowing the more cautious players to play it safe and enjoy a bucket load of free spins. It may be a little dated in 2019 but there’s a good reason why Game of Thrones has enjoyed so long at the top of Microgaming’s output, and that’s because it is a high-quality slot with a great theme, good design, and great potential.