It can certainly be said that the past couple of months have been particularly intense for Thunderkick. The gaming provider launched three new slots, and apparently, it is not done yet. After Zoom, Spectra and Babushkas Thunderkick has announced the release of a new slot called Frog Grog. The game will be available on 10.10.2016. 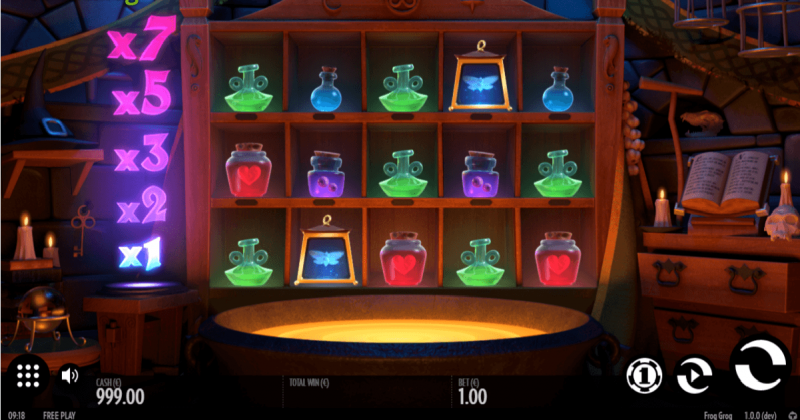 The game has a magic inspired theme with the background showing a candle filled laboratory full of books of spells. The symbols on the reels are all theme related and feature an array of brightly coloured potions filled with eyes, hearts, plants and moths. The wild symbol is a frog and it can substitute for all other symbols. Whenever a wild is part of a winning payline, the frog will burp and remove all the symbols from the row and column it appears on. The frog will turn orange and remain in place until it forms part of a new winning combo or for the rest of the round.

Frog Grog has one main special feature. This is the Mystery feature that triggers manually when no new dropping symbols would otherwise occur. During the Mystery game all symbols except the moth, flower and wild frog, are removed. The removed symbols awards scatter wins according to the paytable up to a symbol count of 5. As this happens, the Multiplier also increases one step for each win during the Mystery Game. So wins can be worth up to 7x more. And since it’s triggered without a will, it’s the best when the mystery feature kicks in when the game is at the highest multiplier.

Our Thoughts on Frog Grog

Frog Grog can be considered a medium High variance slot with a theoretical RTP of 96.1%. The game has the high design standard usually associated with Thunderkick games and the many features allow for wins of up to 1,600x the total stake.