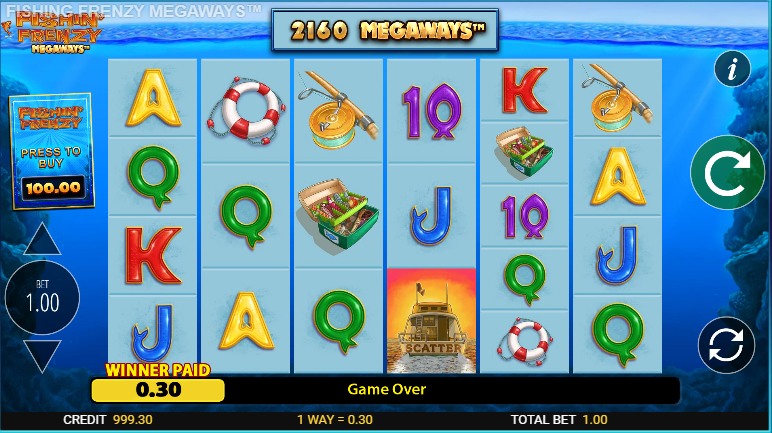 Of course, this isn’t the first old title to receive the Megaways™ treatment with the likes of NextGen’s Medusa, or Blueprint’s own Slots O’ Gold already well-established revamps.

Fishing Frenzy initially came with just the 10 pay lines and was a rather simplistic affair.  The Megaways™ version has a rather more substantial 15,625 ways to pay – but pay lines aside, is it any less simplistic?

Fishing Frenzy Megaways™ is a highly volatile affair with 6 reels, each with up to 5 symbols on any spin. The big wins are almost exclusively going to come from the free spins round where the special fish symbols each come with cash values up to 50x the stake. This slot also benefits from a buy-a-bonus feature.

Fishing Frenzy Megaways is one of the 9 wins you'll see in our "Best New Slots of April 2019" compilation video above.

Due to regulatory changes, most casinos now require that you register with a player account if you want to play the free play demos (no deposit needed). In the above video, you'll see streamers such as jarttu84, Spintwix, miikapekka, LetsGiveItASpin, Huggehugg, NickSlots, and Slotspinner all playing on LeoVegas, FrankFred, and Hypercasino.

These are safe and reputable casinos that you might want to consider trying out yourself.

As this slot is based on a previous release there wasn’t an awful lot for the design team to work on. Keeping the look as close as possible to the original slot is the order of the day here in the hope that the ‘retro’ look will give the design a little cache, which, to be fair, it does.

The action takes place just below the surface of the ocean, with seawater surrounding the rectangular game board, flanked on either side by a rock or coral structure.

Low-value symbols are the standard 10-A royals. High-value symbols are a fishing tackle, lifebelts, fishing rods, and seagulls. The seagull is the highest paying symbol, awarding 200x the bet size for 6 adjacent symbols.

Special fish symbols also appear, paying 10x for 6 of a kind - but a lot more in the bonus game. The scatter is a yacht and the wild is a Fisherman. Like the fish symbols, the Fisherman has additional significance come to the free spins round, but we’ll get onto that later.

Fishing Frenzy isn’t exactly overflowing with special features but of course, as with any other Megaways slot, it does benefit from a free spins bonus round.  There is also a buy-a-bonus option.

These cash values come into play whenever the Fisherman appears during the same spin as any fish symbols. When the two combine the Fisherman will cast his rod and drag all the fish symbols on the board (not just those forming part of a winning combo) and all the cash values will be added to create a sizeable win.

If more Fishermen land on the same spin the cash wins will be added again for each additional Fisherman.

You can avoid the base game entirely and buy straight into the bonus game by paying 10x the stake. This will obviously increase your volatility considerably but can pay big rewards.

While Fishing Frenzy Megaways™ is undoubtedly a significant improvement on the original; I can’t help but feel it could have been better. Of course, the design and graphics are rather dated, but that is excusable given that it is simply an upgrade on the original.

The potential doesn't let this slot down either, 10,000x is a big enough prize to tempt any win chaser. It’s the gameplay which falls a little bit flat. The base (and bonus) game wins are just too low to ever get excited over.

There are no cascading reels, no-win streaks, and no increasing win multipliers during free spins. This makes playing in the base game specifically, a bit of a drain.

This game is literally all about the fish and the fisherman during the bonus round and is undoubtedly where the best part of the RTP comes from. To offer some positivity here, this is a superb feature which, and often does pay handsomely.

Personally, I would have preferred the action to be spread around a little more to spare the tedium and disappointment of the base game wins. However, I’m sure fans of the original will