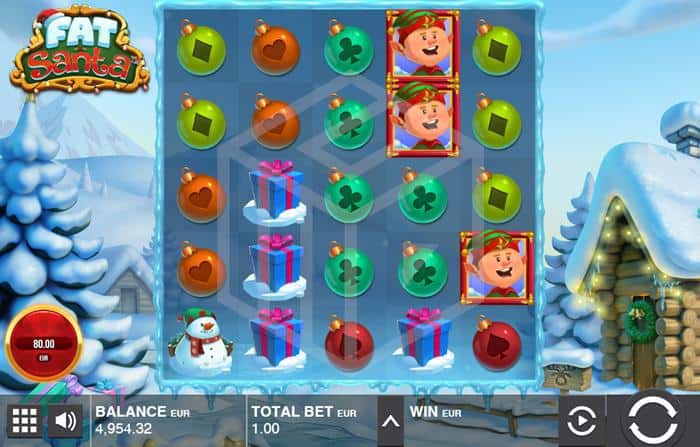 Fat Santa has embraced the yuletide theme well with its cartoon design. The backdrop is of an invitingly snowy scene with big snow covered outdoor Christmas trees to the left of the game board and a log cabin with a festive wreath on the door and a reindeer carving on the wooden letterbox to the right. In the distance, snow-peaked mountains can be seen to the left and right while snow falls all around. The soundtrack is upbeat with a synth backbeat and xylophone sounding chimes giving it a festive slant. The lower value symbols are baubles decorated with the four card suits, clubs, diamonds, hearts, and spades. In order, the higher value symbols are represented by a Christmas box, a snowman, a reindeer, and the two highest value symbols are the elf and Santa himself, both of which pay 20x the bet size for 5 along a pay line. Santa also doubles as a wild symbol, the other wild symbol being a Christmas pie (more of which later).

The base game benefits from a random wilds feature but the main aim of Fat Santa will be to hopefully activate the Fat Santa Free Spins round, an interactive and potentially highly lucrative affair which can be activated in the base game or through the ‘Buy-a-Bonus’ option.

If you are looking for a slot which offers a feature buy, but Fat Santa isn't your cup of tea then click on buy bonus slots to discover more like this.

The Sleigh Feature triggers randomly during the base game and involves a large animated Santa and his reindeers whizzing from left to right and then back again across the screen dropping multiple Christmas pie wilds onto the game board as he passes. With stacked symbols, this can occasionally yield a decent win, although with the relatively poor wins for anything other than five of a kind it is the free spins round which is the ultimate goal in this game.

Our Thoughts on Fat Santa

Although this is basically just a repackaging of Fat Rabbit it’s a smart move on Push Gaming’s part as they get to introduce a whole new audience to one of their most popular slots, as well as attracting those who have already bought into the original. It may even tempt those who have moved on to other slots back to an old favourite. With plenty more recreational players to attract over the holidays, there is plenty of new blood to be had with a decent Christmas themed slot. This is also Push Gaming’s first Buy-a-Feature slot, and that could be significant as it eliminates the potentially very long wait to access the all-important free spin bonus round. This will be of huge appeal to action junkies, especially as Fat Santa is a high volatility slot where practically all the big wins will be won in the free spins round. Of course, by paying 80x the stake this isn’t without a considerable risk, but the potentially huge returns are bound to attract the true gamblers within the community. Overall Fat Santa is a great addition to the roster and the ‘Buy-a-Feature’ option is a sure-fire way of keeping the high volatility fans happy and spinning over the Christmas period.