The initial 3x4 reel set sits in the centre of the screen. The reels consist of symbols, carved into a square, limestone rocks and the reel set is framed with a think layer of blue rock. A large rainforest tree sits to the very left of the screen with a long branch reaching right across the top of the screen. An epic vista unfolds behind the reel set; to the left is the Colombian rainforest with rainclouds above a cascading waterfall. To the right of the reels, the cloud gives way to blue skies and lush open grassland leading up to a stunning golden temple bathed in sunlight. Obviously the more consecutive wins you manage, the less of the backdrop is visible as additional reels obscure your view. The soundtrack is your typical Aztec/Ancient South American fayre with panpipes, tribal drumbeats, and plenty of birdsong.

Low value symbols are green, orange, blue, yellow, red, and pink gems. High value symbols are green, blue, red, and yellow tribal masks carved in the stone. The yellow mask is the highest value regular symbol with each symbol worth 0.25 the bet size. The scatter is a Golden Temple which pays the same as the yellow mask, and the wild is a Native male.

As already explained a win must of 5 or more identical symbols landing on adjacent reels. In order to continue the winning streak, the 5 or more symbols must cover all three reels. A winning combo over the first three reels awards one additional reel. It also adds a 1x win multiplier to all symbol wins. As long as the win is improved by the addition of the next reel another new reel and another 1x win multiplier is added. When the winning streak ends the reels revert back to a 3x4 set-up and the win multiplier resets to 1x. 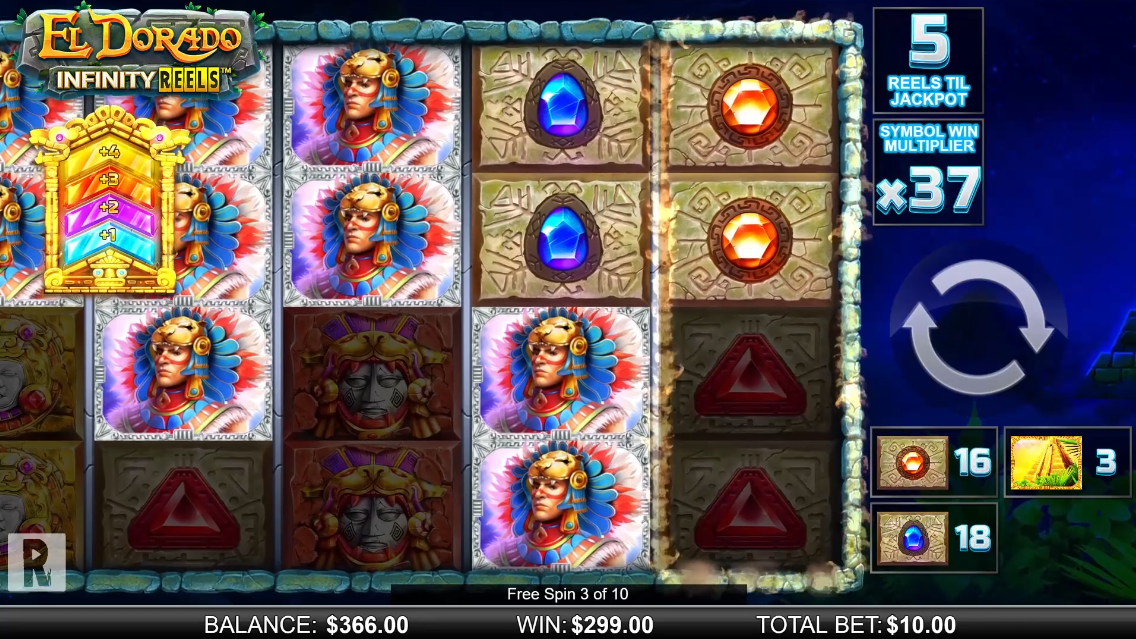 5 or more temple scatters activate 10 free spins and present you with an opportunity to increase your free spins level. Higher levels add more win multipliers after each winning spin.

After triggering the bonus round you are given the option to either play, gamble, or store your current level.

Similar to the way in which win multipliers work in most Megaways™ slots, during the free spins round the win multiplier is sticky insofar as it does not reset to 1x after a losing reel addition. Any temple symbol landing during free spins adds four more spins.

A jackpot of 888x the bet size is awarded for any winning streak which results in 12 or more extra reels being added. The jackpot occurs in both the base and bonus game and in neither case is the win multiplier applied.

El Dorado Infinity Reels is, in my opinion, the best slot Reel Play has released to date, including Hypernova Megaways™ and both the Buster Hammer slots.

It’s not that the theme is particularly original, there are plenty of El Dorado/Aztec themed slots on the market. There are also plenty with increasing win multipliers, and plenty more with gamble features. However, it is the way in which they are presented which comes as a breath of fresh air/ The Infinity Reels mechanic is true innovation, and for this alone this slot is worthy of high praise indeed. Whether the novelty will prove as enduring as, say, the Megaways™ mechanic is questionable, but for now, at least it delivers something fresh and new. Also, there is plenty of potential with a win of up to 6,250x the bet size available in the bonus game, as well as a very tasty jackpot to aim for.

As a medium/high variance game, this slot could have good cross-over appeal to both high variance fans and those a little more risk-averse. The artwork and animation aren’t world-beating, but they are certainly competitive. All in all, this is a very good effort from one of the smaller studios out there.