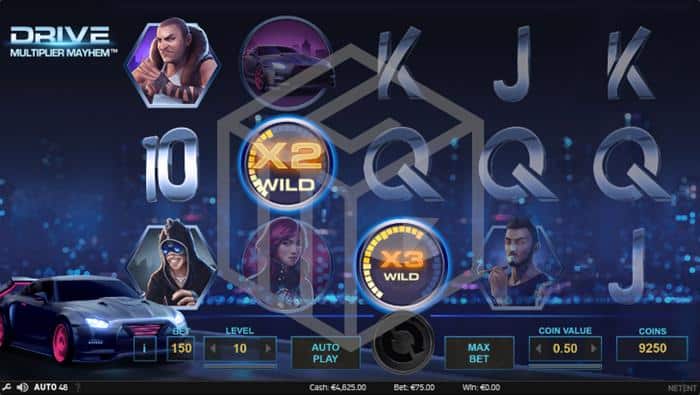 NetEnt always does a good job with their design work, and once again they’ve delivered a beautiful looking slot with Drive: Multiplier Mayhem. The screen shows a tricked out car in the bottom left driving along a city road at night while across the river you can see a hazily twinkling city skyline obscured ever so slightly by the smog of the city. The symbols are floating (no frame and transparent reels) which gives you a constant view of the city behind. The accompanying soundtrack is suitably edgy, electronic, and futuristic.

The low-value symbols are taken by metallic looking royals 10, J, Q, K, and A while the high-value symbols are represented by the competing drivers (Twitch, Hamaki and Bruiser) and the car, with Jette (the character the player assumes) the highest paying, awarding 10x the bet size for 5 on a pay line. The game also comes with multiplier wilds (discussed in more detail below), and a scatter symbol on reels 2, 3, and 4. There is also a Nitro symbol, but this only appears during free spins, and once again its function will be described in more detail below.

The multiplier wilds which occur in both the base game and the bonus round are key to any success you might have on Drive: Multiplier Mayhem and the scatters trigger a progressive free spin round where you face off against other drivers. 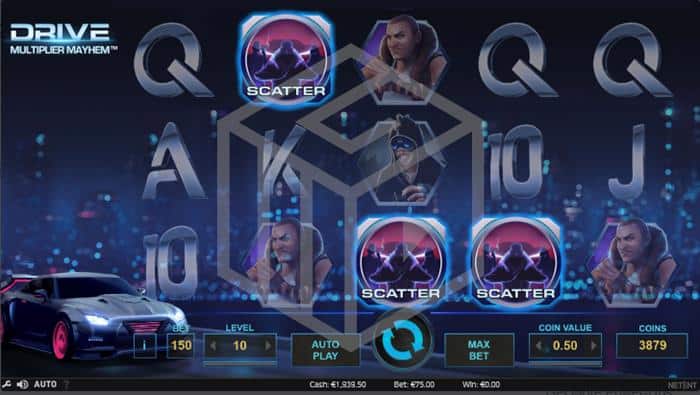 Wilds appear on all five reels, and each comes with a multiplier which is equal the reel it appears on. For example, wild on the first reel is just a standard 1x wild whereas a wild on reel 2 will have a 2x win multiplier, 3x for a wild on the 3rd reel, 4x for the 4th reel and 5x for the 5th reel. These wilds can seriously improve your wins, especially if you land more than one wild as any wilds appearing on different reels which both contribute to the win will me multiplier together. If you land a win which uses multipliers on reels 3 and 4 then that win will be subject to a 12x multiplier. This means that it is possible, by landing wilds on reels 2, 3, 4, and 5 which all contribute to a win then that win would be multiplied by 120.

Land 3 scatters on reels 2, 3, and 4 and you are awarded 10 free spins and whisked off to a new screen in which the road (and game board) is viewed through your windscreen, while to the left you can see another car you are racing against. In the free spins round a Nitro symbol will also be added to the middle three reels and it is these Nitro symbols which enable to you win races and move up a level to the next race. They will also award you additional free spins and overlay multiplier wilds to take with you.  Overlay wilds appear randomly on the reels with each new spin with a maximum of one per reel.  You need to land a total of 3 Nitros during your spins to move up a level. If a Nitro appears above a wild, it also acts as a wild symbol. The levels are as follows: 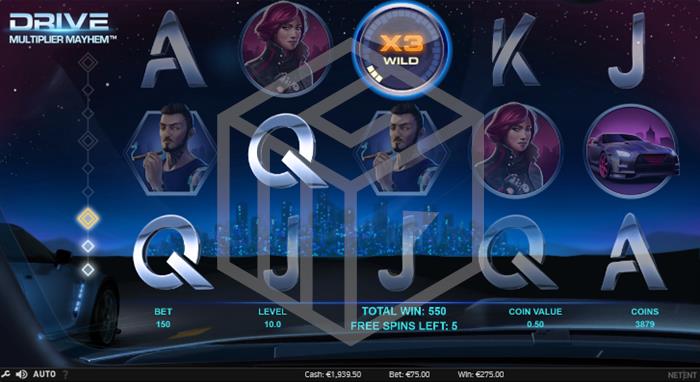 Our Thoughts on Drive: Multiplier Mayhem

Drive: Multiplier Mayhem may sound a little complicated when you get into the overlay multiplier wilds and Nitros and progressing through races during the free spins round – but it really isn’t when you’re actually playing it. In fact, it’s extremely easy to follow and get into. It also offers the opportunity for some stellar wins of up to 1200x the stake in the base game and over 5,100x the stake in the bonus game. Although the really big wins will come in the bonus game, with multipliers of up to 120x available in the base game you can also take down some very nice wins simply playing the standard game, which is always nice.

So all in all this is a job well done by NetEnt; it has great visuals, an interesting theme, great features, and best of all, awesome potential.