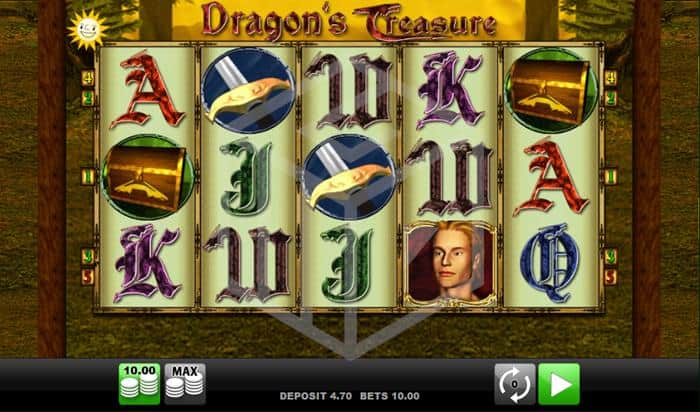 One thing is for sure, this game hasn’t remained popular over the years because of its design! Sure, we are talking 2011 here, and graphics and animation have moved on in the online slot world considerably since then – but the graphics in Dragon’s Treasure wouldn’t have looked out of place in a late 80’s arcade game, they are pretty laughable.

The background is some grass with what is presumably a couple of thin tree trunks either side of the game board, so I’m guessing it’s a forest? The character symbols are also amusingly poorly drawn, as is the dragon and warrior battle animation. 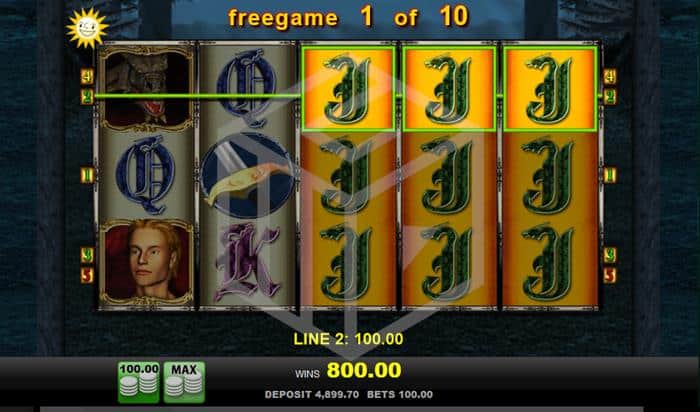 As is the Merkur way you are able to gamble every win in the base game or the bonus game. As it is a ‘Book’ clone, the bonus game in Dragons Treasure is a free spins round.

Land any win and you’ll be given the option to each collect your win or to gamble with either the red/black playing card gamble, or the ladder gamble. The card gamble shows a row of face-up playing cards and you must guess whether the next card will be red or black to double your win. You can gamble your win up to £140. The ladder gamble is a simple gamble up a cash ladder which again can go as high as £140. While this is a nice feature it’s kind of irrelevant for the higher stakes players who won’t be able to gamble anything other than the very smallest wins with the £140 limit. There is also an option to collect half your win and gamble the remainder. 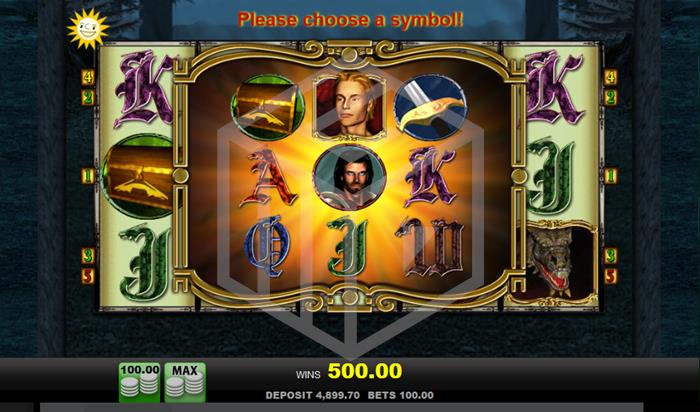 Land three or more scatters and you’ll earn 10 free spins. As with any ‘Book’ clone, one of the standard symbols will be chosen as a special expanding symbol which will expand to cover the whole reel if it is included in a winning combo from a free spin. What’s more, unlike any other symbol (other than the scatter) you don’t need the first symbol of the win to be on the left-most reel, and nor do the symbols necessarily have to be on adjacent reels. For example, if the chosen ‘special symbol’ was a King, then you could land a King on reels 2, 3, and 5 and this would count as a “three in a row” win. All three rows would then expand, and you’d be paid as though you had landed a 3x3 block of Kings.  One difference between this game and most other ‘Book’ clones is that you get to choose which symbol is ‘special’ before the free spins begin. You will be more likely to land wins with the low-value symbols, but can take a higher variance stance and pick a high paying symbol.

Our Thoughts on Dragon’s Treasure

Well, what can we say? It’s a book clone, it has terrible visuals, and in terms of gameplay, there are countless (almost) identical versions of this game from multiple providers. Then again, when you’re playing something as well known and simple to follow as a ‘Book’ clone, it really doesn’t matter too much about the graphics, and it might come down to the RTP or the frequency of landing the feature – or maybe the retro graphics are up your street? Who knows? I actually like the fact that you can choose the variance with the special symbols in the free spin round, and at least the RTP is considerably better than the paltry 92.13% offered by the original Book of Ra. The slot still manages to perform reasonably well so I guess if you like a ‘Book’ slot and get bored playing the same version there’s no real reason not to try this one. The volatility is still nice and high which pro grinders like and you can win up to €150k on a spin if you’re extra lucky.