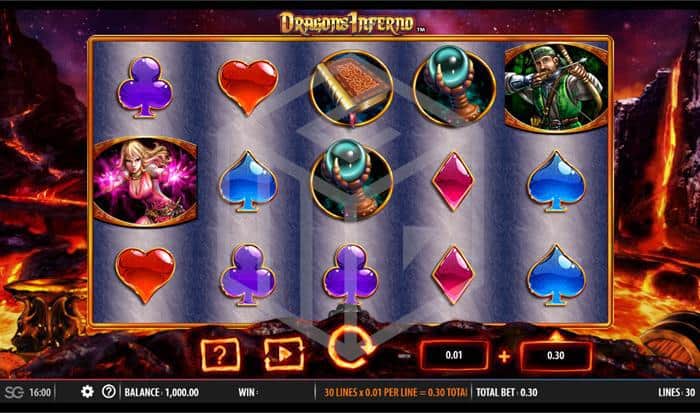 Dragon’s Inferno is set among a backdrop of terrifying caves and mountains and a molten lake inhabited by the fire-breathing dragon. Ominous tones dictate the background music with plenty of chilling strings, unpredictable chimes, and booming bass drum beats. The low-value symbols, as is often the case, are the four card suits (hearts, clubs, diamonds, and spades), the middle-value symbols are a potion, a crystal ball, a dagger, and a spellbook, and the highest value symbols are the archer, the elf, the knight, and the treasure (which is also a wild symbol), the highest paying symbol, which pays 16.67x bet size for 5 on a pay line. There is also a Dragon Treasure symbol which only appears on reel 3 and also acts as a wild, as well as triggering one of the game’s features if it combines with a win (more of which later), and the other symbol is the Dragon scatter which can activate the free spin bonus round.

If you land this symbol in conjunction with a winning spin, then the Dragon Treasure will select a number of random symbols to be replaced with the symbol from the winning combo which can lead to some very nice wins indeed.

In the event of two different wins landing the Dragon Treasure will choose the highest paying to replicate with random wilds. Free Spins Land 3, 4, or 5 Dragon scatters and you will receive 10, 20, or 40 respins, throughout which all wins will be doubled. What’s more, land 3 or more scatters during the free spin round, and you will retrigger yet more free spins. It is also possible to land the replicating wilds during the free spin round. Land this with the 2x multiplier, and you will be looking at a potentially monster win. 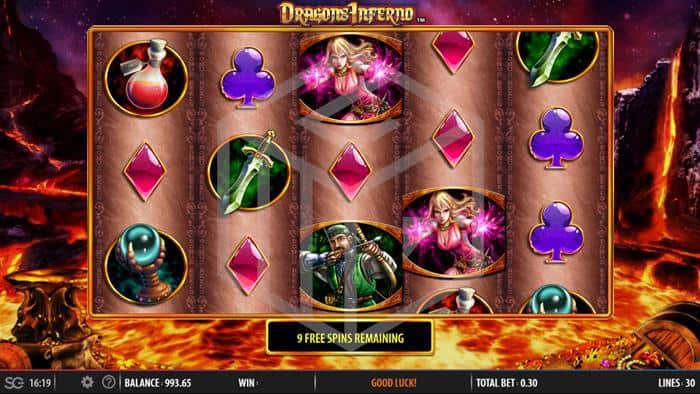 Our Thoughts on Dragon’s Inferno

Considering its year of release, Dragon’s Inferno has aged surprisingly well. It covers a popular theme, has a couple of decent features which pay well, and throws out enough (admittedly usually quite small) base game wins to keep the action flowing. The feature wins, when they come, are always worth waiting for, and if you’re a high volatility fan, then you’ll appreciate Dragon’s Inferno. Perhaps in today’s market, there are plenty of other slots to choose from with similar appeal, but the fact that Dragon’s Inferno still brings in the punters to this day is a testament to its overall playability and value as a classic slot.