Merkur’s last release of 2018, Dragon & Knights revisits a popular theme for the no-nonsense German provider who found previous success with titles such as Knight’s Life, Magic Mirror, and Dragons Treasure.

Usually, you can expect a high volatility affair when Merkur drop a new slot but Dragons & Knights sit more in the medium variance range and aren’t quite so brutal on your bankroll as some of their other titles can be.  As with most Merkur slots the game plays off a 5x3 reel with 20 fixed pay lines and an RTP of 96.05%.

The game benefits from a free spins round with multipliers and two wild symbols which help in both the base game and in the bonus game and can be played from €0.20 to €40 a spin. 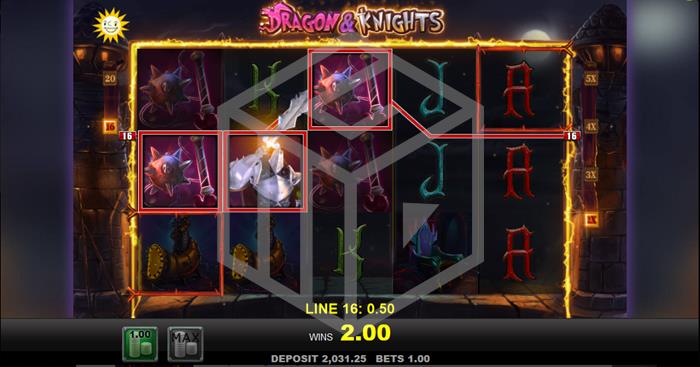 As is the Merkur way the design for Dragon’s & Knights is fairly straightforward, although perhaps not quite as retro as they can be with some nicely drawn symbols and animations. Befitting the ominous nature of the medieval theme the backdrop is set at night time barely illuminated by the distant full moon and is set atop a spooky castle with an urgent, sinister backing track playing in the background. At either side of the games transparent reels, you will find two gauges which measure the free spins on the left and win multipliers on the right.

The low-value symbols are the standard  10, J, Q, K, and A royals followed by medieval weapons, flames, thrones, and castles. The castle is the highest value with 5 on a pay line worth 50x the bet size. There are two wild symbols, the brave knight and the fire breathing dragon, and there is a glowing green shield symbol which only appears on the third reel during the free spins round.

As well as the free spin features with multipliers the game also comes with several gamble options when you land a win. 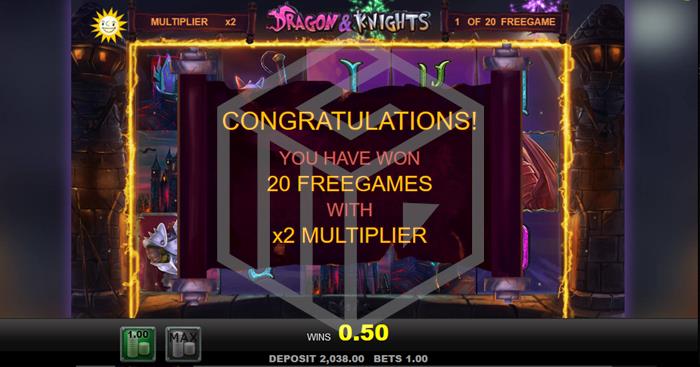 Land any win and you’ll be given the option to each collect your win or to gamble with either the red/black playing card gamble, or the ladder gamble. The card gamble shows a row of face-up playing cards and you must guess whether the next card will be red or black to double your win. You can gamble your win up to £140. The ladder gamble is a simple gamble up a cash ladder which again can go as high as £140. There is also an option to collect half your win and gamble the remainder.

During the free spin round the green shield symbol may appear on reel 3, and every time it does you will be awarded an additional spin. 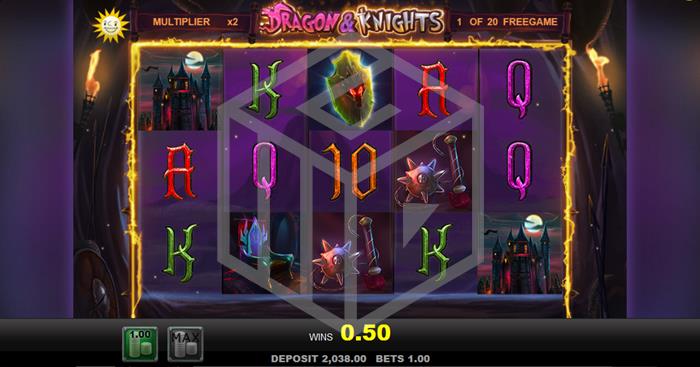 This is standard fare from Merkur, a straightforward, no-nonsense slot with an easy to follow the theme and construct with passable graphics and a nice couple of features. I’m not sure it will pass muster with your typical Merkur slot fan who is used to a much higher volatility game because the free spin round isn’t a huge payer. It is triggered a lot more easily than your average Merkur bonus round and although you tend to end up with quite a few more free spins than you started with as the Green Shield lands surprisingly frequently, the wins are mostly small, even with the multipliers. This game will appeal more to the casual or lower variance fan and is worth a try if you’re looking for a new, uncomplicated slot to add to your playing roster.