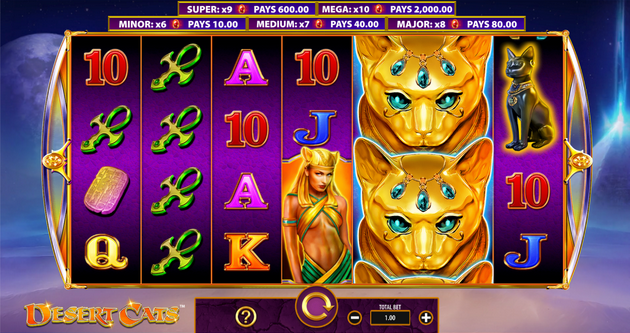 WMS is renowned for bringing across land-based casino slots to the online sector, and once again this is the case with Desert Cats. As such whole user interface has a very land-based casino look and feels to it which I’m generally not keen on, although this one doesn’t look too bad.

The landscape game board is framed in gold with purple reels. The five jackpot totals are shown on panels above the board with the usual controls beneath.

The background design shows an ancient pyramid to the right illuminated both by the moon to the right and by some mystical energy concentrated at the tip of the pyramid. A soundtrack featuring an upbeat Arabic melody accompanies you while you play.

The highest value regular symbol is Bastet (Egyptian goddess of warfare) whose value is also matched by the golden cat wilds. The word ‘value’ is a subjective term, however, as 7 on a payline of these ‘high value’ symbols returns just 4x the stake!

Golden cat wilds appear either as regular sized or as 2x2 symbols, with a full row of 2x2 wilds appearing on every spin. The scatter symbol is a golden lion.

In addition to the giant wilds, there are also 5 different jackpots which can be awarded during the base game, and a free spin round with extra wilds.

During the base game, the two 2x2 golden cat wilds appear wearing a bejewelled head chain which either contains a number of blue or red jewels. If enough red jewels land, the jackpots can be triggered. The jewels required to trigger each jackpot are as follows:

Landing 3, 4, or 5 lion scatters awards 5, 15, or 50 free spins. During free spins, there will be two lots of 2x2 wild reels which obviously increase the win frequency. Free spins can be retriggered, but as 4 reels are wilds, the maximum retrigger is 5 spins for 3 scatters.

Our Thoughts on Desert Cats

After playing Desert Cats for quite some time I can honestly say I have no desire to play it again. The main problem with it is that the regular line wins are simply way too small to be of interest. Even with a potential 4 reels of wilds from rows 1-4 in the bonus game the wins still disappoint.

The free spins are also pretty hard to trigger, meaning a LOT of spins in the poorly paying base game.

Plenty of wins will be accrued of course, but when they rarely top 1x the stake it becomes of a snooze fest.

The 95.79% RTP is also a little low but if the game provided adequate entertainment that wouldn’t really matter. Most of that RTP, certainly as far as my stint was concerned, came from the jackpots – and as they are more or less randomly triggered, winning them tends to be far less fun than via a more interactive feature.

So, to sum up, Desert Cats offers lots of reels, lots of wins, and lots of jackpots. Unfortunately, it offers very little fun!