Deco Diamonds by Just for The Win released on 2018 is a 5-reel & 3-row online slot with 9 paylines and a 96.03% RTP. This is a classic fruit-themed game offering players a max win of up to 2323x their stake. Deco Diamonds can be played on all devices from €0.1 to €50 per spin and is considered a low volatility game. 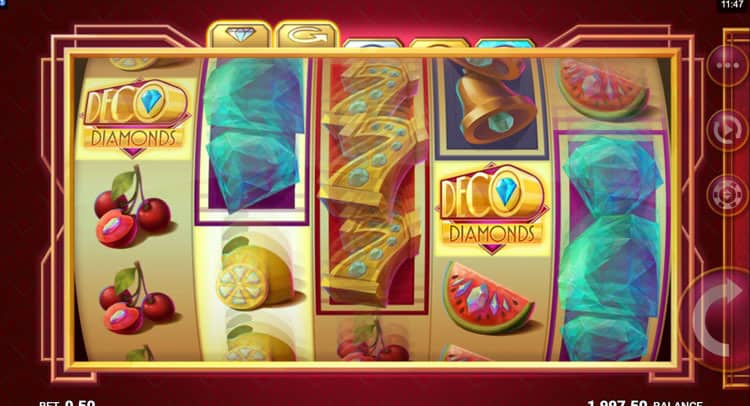 The symbols are those of a typical fruit machine, so we have diamonds, cherries, lemons, watermelons, bells and sevens. The highest paying symbol is the Deco Diamond wild which gives 1000x the stake for five of them across a winning line. This wild works also as a bonus symbol and substitutes for all other symbols. The lower paying symbols include the watermelon, lemon, peach and cherry. Since all the lower paying symbols are covered with diamonds, none of them really look low paying, just as one would expect from an Art Deco theme. As for the music of Deco Diamonds, think of your typical roaring twenties flapper music and put that right behind this slot game.

The first thing that popped into our heads when we saw the special features in Deco Diamonds was that the mechanics were similar to the ones in Hong Kong Tower by Elk. They both have more or less the same bonus wheel feature going on, with the same kind of thought behind it, either to move to the next wheel or win. The difference is that in Hong Kong Tower you win coins, and in Deco Diamonds, you win a multiplier. 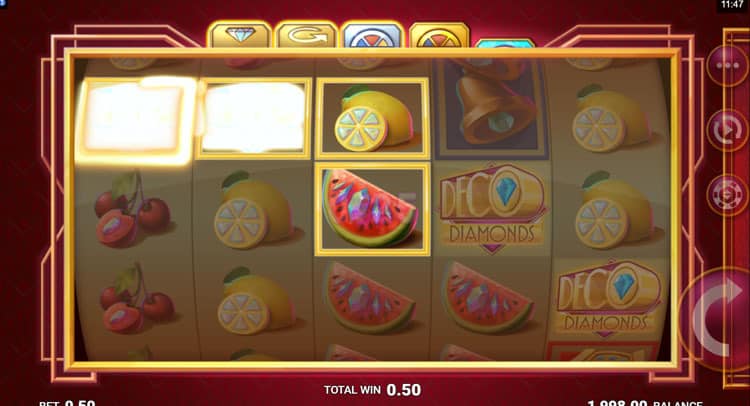 You can trigger this feature by landing two or more Deco Diamond wilds.

To trigger this bonus you need to land three or more Deco Diamond wilds. Immediately after the re-spin feature plays out, the bonus round will start.

Other Just for The Win games