With the best pork chops in west New York, let’s see if Deadwood also provides top features for us players to enjoy.

The Hunter Wild symbol is denoted by the three fierce characters themselves. Like in the majority of slots, the Wild symbol can substitute for any other symbol displayed on the reels except the Scatter and Sheriff’s badge.

The feature can occur on reels 2,3 and 4 when a 4-row high wild symbol lands and nudges to expand along its reel.

Every time one of the hunter wilds nudge, one step will be added to the multiplier.

Get caught up in a saloon shoot out when a Sheriff’s badge lands on reels 1 and 5 during the main game. Stuck in the crossfire on reels 2, 3 and 4 are low paying symbols which will act as Wilds.

Three buffalo skulls landing on the reels will trigger the free spins round. This feature comes with 2 different options. 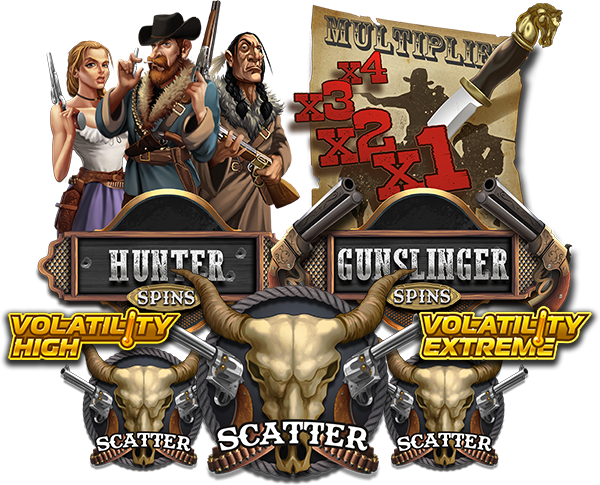 If you chose to activate the Hunter Spins then during each spin at least one of the Wild hunters will be presented on a random reel.

Look out for Sheriff who can appear at any time dropping his badge on reel one and 5. With the Sheriff on your side, each badge dropped will award you with 1 additional spin. If the Sheriff is feeling generous and drops both his badges on a single spin, the feature will upgrade to Shoot Out Hunter Spins.

During the Shoot Out Hunter Spins the Sheriffs badge will be locked in place and you will have a chance to really boost your winnings.

During the Gunslinger spins the Hunter Wilds will award you an unlimited win multiple which will remain in place for the duration of the feature. The win multiplier has the ability to increase by 1 each time the Hunter Wild nudges one step.

Again, just like with the Hunter Spins lookout for the Sheriff who can drop his badge on reel one and 5. Each badge dropped will award you with 1 additional spin. If the Sheriff is feeling generous and drops both his badges on a single spin, the feature will upgrade to Shoot Out Hunter Spins.

If the feature is triggered during the main game 10 free spins will be awarded and you will have the opportunity to select one of the following modes: Shoot Out Gunslinger Spins or Shoot Out Hunter Spins.

If you want to skip straight to the features in the slot then you can purchase either the free spins round where you have the option to select one of the 2 rounds, or you can purchase the Shoot Out feature.

The purchase price of the features will vary depending on your bet amount set.

The cheapest option is 150eur for the Shoot Out feature and 14.20eur to activate the Free Spins.

Brave enough to bare the empty streets of what appears to be a deserted old country-western town? As you pass by the Deadwood saloon you will find 5 reels and 4-row gameboard which is set in the middle of the street.

The dusty streets and reels are littered with bars of gold, an expensive-looking pocket watch, a safe of cash followed by bottles of booze and shotguns. These items make up a good reason for a heist as well as representing the highest paying symbols on the reels.

The soundtrack in the background is somewhat relaxing and easy on the ears. The lowest paying symbols are also easy to recognise as they are represented by the most common symbols - 10, J, Q, K, and A.

Our Thoughts on Deadwood

Following a similar theme to many other big named slots such as Dead or Alive or Sticky Bandits, Nolimit City made a bold move to launch Deadwood. To my surprise, I was impressed with the new release and addition to the western-themed slots.

The game offers some exciting features, including the feature buy which allows you to skip straight to the fun parts. I also like the fact, Nolimit City has given players a chance to select which free spin option they can play. It keeps you drawn into the game and enhances your players' experience by getting you more involved.

The graphics and quality of the new slot can not be faulted and with a chance to win up to 13 950x your stake what is not to love?