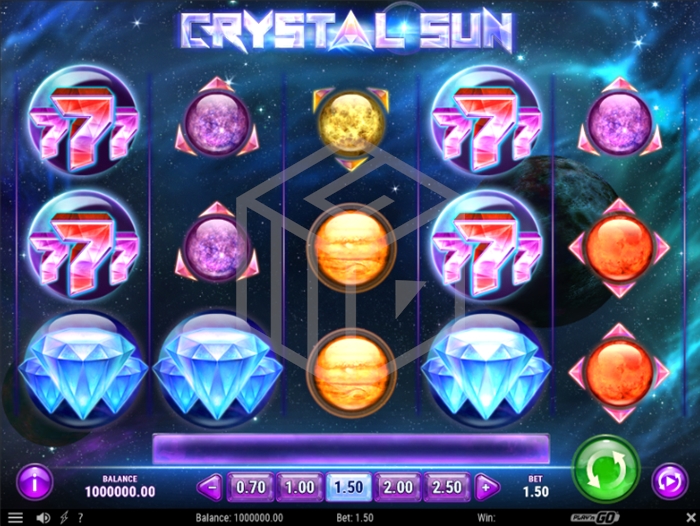 The design work here is nothing new. In fact, if you’re familiar with any number of interplanetary type slots set in deep space, then the look will be instantly familiar to you.

Virtually the entire screen is the gameboard which has transparent reels to allow you to see thousands of twinkling stars as you look out into deep space.

There is also a couple of rotating planets in the foreground which are only obscured by the symbols on the reels. The occasional animated starlight show and eerie music complete the background visuals and sounds for Crystal Sun.

The crystals are the most valuable, awarding 16x the stake for 5 across a payline.

The only other symbol, a la Starburst, is the star-shaped wild which expands to a full reel full of wilds whenever one lands in view. Wilds only land on reels 2, 3, and 4. 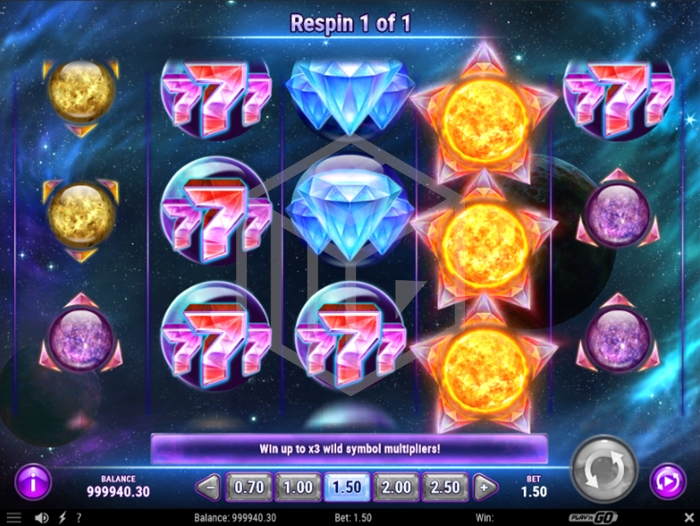 There is but the one special feature to speak of, and that would be the landing of a wild symbol which triggers Wild Respins with Win Multipliers.

Whenever a wild symbol lands and expands to fill its row with star wilds a respin is awarded. Land another wild to unlock another respin. Finally, if a third expanding wild lands, then a third and final respin is awarded.

The one and only immediately noticeable difference in gameplay between Starburst and Crystal Sun are the appearances of multipliers with the wilds.

Each wild reel will come with a multiplier of between 1 and 3.

The multipliers on each reel are then added up to give the total multiplier applied to any win of which they are a part of. Therefore the maximum win multiplier in this case with being 9x (3x + 3x +3x).

Our Thoughts on Crystal Sun 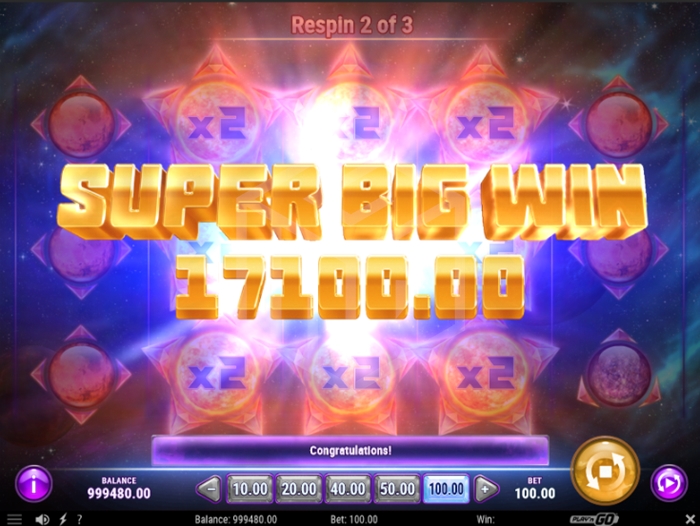 It’s a disappointing effort from Play ‘n Go here. I suppose, given the continued popularity of Starburst that you can’t blame them for making what is essentially a high variance clone.

Also, it’s not as if cloning popular slots is a new thing – look at the deluge of Book of Ra clones there are out there.

In 2019, however, it seems a bit lame to come out with the first clone of a game which has been around for 6 or 7 years already.

That said, if I had to choose between this and Starburst I’d probably choose this.

It’s in no way as visually impressive as the NetEnt slot, and the production values are nothing special.

However, with a max win of 4,000x the stake and with wild multipliers, the potential is vastly superior to Starburst.

Will it work as a high variance slot though?

I always thought part of the appeal of Starburst was that you could play it for a decade without losing (or winning) too much money.

With this incarnation, the volatility will certainly not allow for that.

Overall, although this slot has decent potential, it’s just too shameless a rip-off for my liking.