Based on the popular UK cartoon series of the late ’80s to the early ’90s, Count Duckula is a vegetarian Duck vampire who feasts on ketchup instead of blood and is more interested in pursuing fame and fortune as an entertainer than in becoming a proper vampire.

Count Duckula is set in a graveyard just outside the grounds of the Count’s haunted castle. The animation and characters replicate those in the original cartoon, while the soundtrack is a somewhat upbeat, 80’s synth-based affair, interspersed with the occasional spooky sound effect, especially when a bonus win might be near.

The low-value symbols are taken by the J, Q, K, and A while the higher value symbols are represented by Duckula’s Coat of Arms, his cuckoo clock, his giant organ, the haunted castle, and the Count himself. This is the highest paying symbol where five in a pay line will earn 500 coins (still only 12.5x the spin stake, however). The other symbols are a wild, symbolised by a stake through a heart, and the scatter symbol which is a gold framed picture of Count Duckula. There are also appearances from other series regulars such as Duckula’s butler Igor, his housekeeper, Nanny, and his nemesis Dr Von Goosewing. 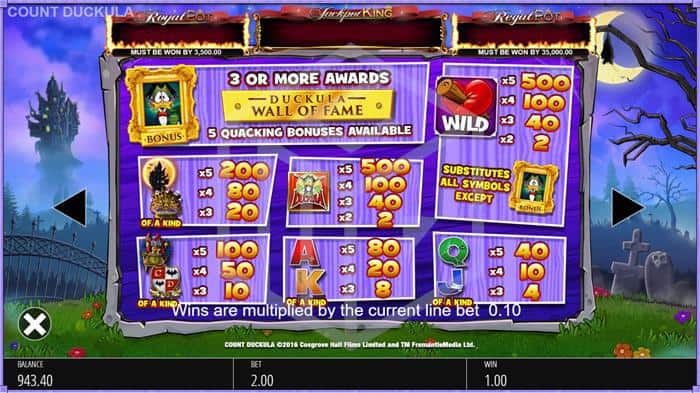 As with many of Blueprint’s releases, Count Duckula keeps its players entertained by offering up a wide selection of possible bonuses including four which are randomly triggered in the base game, and six possible features during the bonus round. 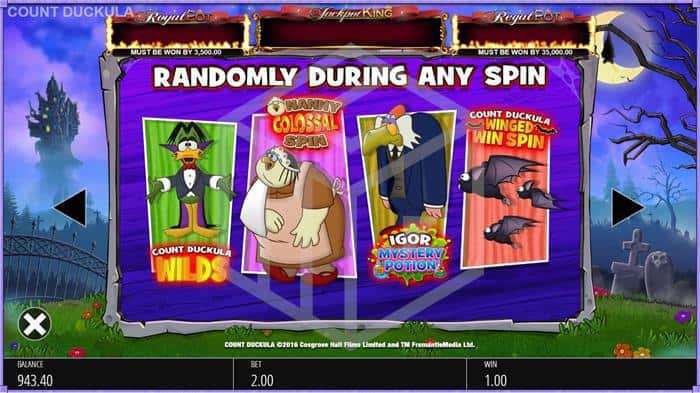 The Wall of Fame Bonus round is triggered by hitting three Count Duckula bonus symbols. You then spin a wheel to reveal which of the 6 bonuses you get. You also have the option to gamble your bonus to the next best bonus. If you win you move to a better bonus, lose and receive a mystery win instead of a bonus feature. In order of value the bonuses are; 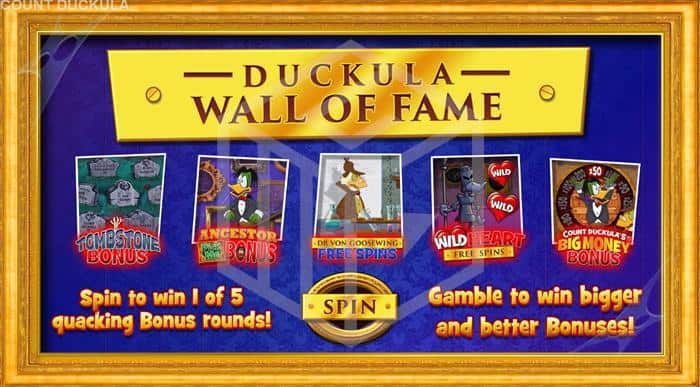 Our Thoughts on Count Duckula

Count Duckula does a great job of staying true to the original cartoon series with great attention to detail and a fun design. There are also some really fun features included in the game, and it’s nice to have the option to gamble to a better feature and potentially to a large progressive jackpot. That being said, unless you happen to have been a child growing up in the UK in the 1980s like this reviewer (and let’s face it, you probably weren’t) then the backstory will be lost on you and it’ll just be another nicely animated cartoon slot. Furthermore, despite some great features, there is really no getting around the fact that with just a 93% RTP, the house edge for Count Duckula is twice that of a lot of equally fun slots, so be sure to factor that in when you plan your session.