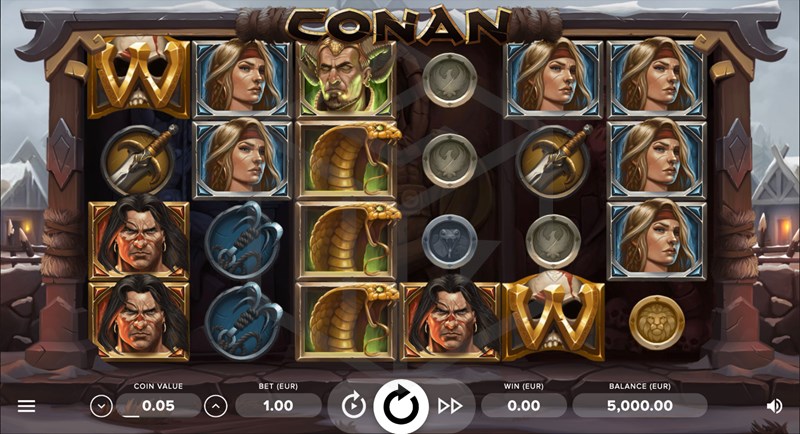 When they put their minds to it, NetEnt’s design team are at the very top of their game, and happily, such is the case with Conan. The backdrop is of a mythical wintry village with fires burning brightly inside each small wooden snow-capped dwelling, although different features reveal various desolate backdrops.

The gameboard covers the vast majority of the screen space, and it is a large, carved wood-framed affair. Inside the gameboard, which serves as some sort of ancient temple, the reels spin over three stone carvings of Conan in various battle poses.

The gameplay is punctured by the sound of whistling winds and the clash of swords on shields.

Naturally, Conan is the highest paying symbol, with 6 across a pay line awarding 6x the bet size. There are two types of wilds, Tower, and Battle which we will discuss later, along with a transforming mystery symbol which takes the form of a large serpent.

The scatter symbols area round shields in front of crossed swords.

In turn, these modifiers can also produce additional features, the Mystery Multiplier, and the Thoth-Amon feature.

There are also three scatter triggered free spin games. Finally, there is a randomly activated linked reels feature which can occur in both the base and bonus games. 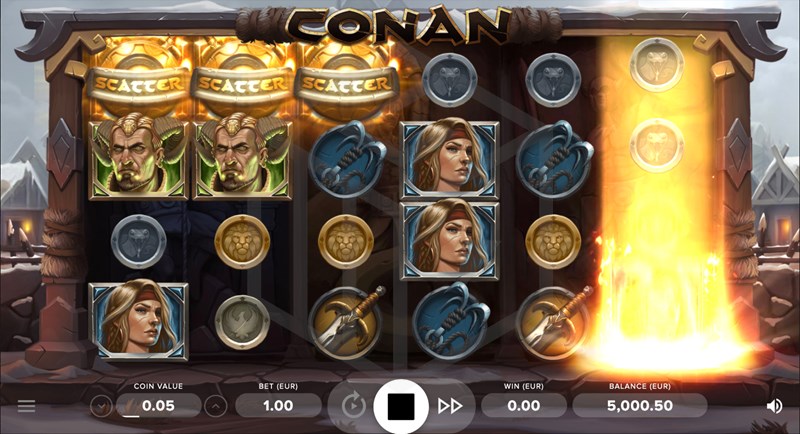 Tower Wilds, represented by a skull with shining blue eyes behind a golden ‘W’ only occurs on the first 2x4 section (reels 1 & 2). Tower Wilds expand to cover part or all of the reel upon which it lands.

Only found on reels 3-4, Mystery Symbols appear as hissing serpents but transform into a regular symbol at the end of the spin.

Looking similar to Tower Wilds but with red piercing eyes rather than blue, Battle Wilds only occur on reels 5-6.

Upon landing Battle Wilds expand sideways up to three spaces on adjacent reels.

Landing a fully stacked Mystery Symbol alongside either a Tower or Battle wild can trigger the Thoth-Amon feature.

If activated the Thoth-Amon feature adds between 3-6 Mystery Symbols randomly between reels 2 and 5.

At any time during the base game, any of the three 2x4 reel sections may light up and become ‘linked reels’, meaning that they will both stop at the same combination of symbols, thus increasing the likely hood of a winning spin.

Linked Reels also randomly occur during all free spins rounds, the difference being they can occur on up to all 6 reels at the same time. 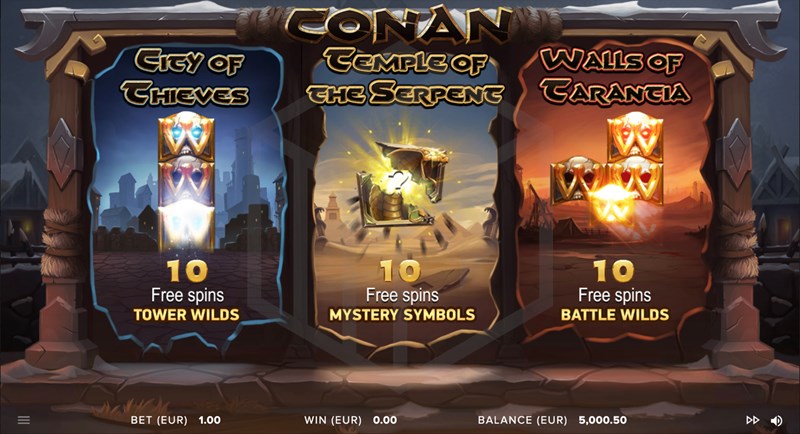 Of low/medium volatility, City of Thieves Free Spins benefits from Tower Wilds which can appear on all reels and expand to cover part or all of the reel upon which it lands.

Temple of the Serpent Free Spins

Of medium/high volatility, Temple of the Serpent Free Spins benefit from Mystery Symbols which can appear on all reels, either stacked or as single symbols.

Of low/medium volatility, Walls of Tarantia Free Spins benefit from Battle Wilds on all reels which may expand up to three spaces that positions sideways on adjacent reels.

Big Wins on the Conan Slot

Wanted: If you win big on the Conan slot, we invite you to create a thread on Epic Wins (1000x and beyond) section of our 23.000+ member strong forum. You might just get featured in a compilation video on our official YouTube-channel.

If there is one thing to be said about the Conan slot, then it is that is a very ambitious one. Design-wise it is top rank with superb attention to detail, fantastic animations, and spot-on artwork.

In terms of game-play, it can be a little confusing, certainly until you’ve fully got to grips with the game, simply because there is so much going on.

Consequently, it took a lot of play to finally experience all of these features. While the game is certainly entertaining, I would question if there needed to be quite so many features – especially as none of them (in my admittedly limited experience) seemed to pay out an awful lot.

I can imagine this game putting off some of the higher variance fans looking for a greater win potential as the proliferation of features means the RTP is spread very thin, with no standout big paying feature to speak of.

However, we know there are players out there who love a variety of features. If they also happen to love branded slots and top-notch artwork, well, then they are in for a treat!