Cash Pump slot is the latest release from Play’n GO, which is made up of four 3x3 grids. This 12 reel classic game has 20 pay lines and a chance to win up to 10,000 times your bet! Based on a daredevil driver, the time comes when he has to make a pit stop at the cash pump to refill. The pump is full of classic slot symbols to give it that timeless and slightly nostalgic feeling. 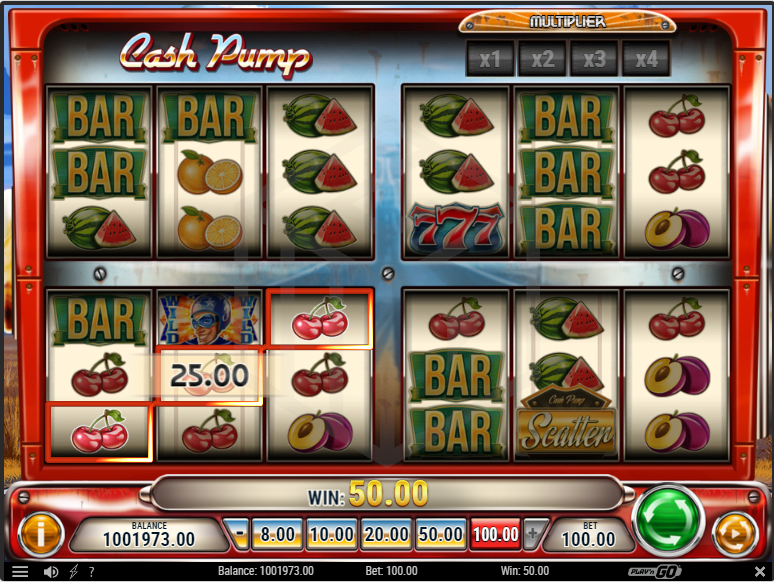 Set in the outbacks on one of America’s most famous routes, route 66, a daredevil driver makes a quick stop at the Cash Pump to refuel. While the reels spin, you can enjoy some upbeat rock tunes, blasting out in the background.

The pumps reels are based on the classic fruit machine symbols, displaying the lowest paying symbols which include cherries, watermelons, oranges and plums, while the highest paying symbols are 777 and the traditional BAR symbol. The Wild is represented by the daredevil driver himself, along with the Gold plated Scatter badge.

As a highly volatile slot game, Play’n GO has ensured us players have some exhilarating features for us to look out for, while en-route. Cash Pump has a unique twist to the game, so make sure to keep an eye for that hothead Wild driver!

Cash Pump’s unique twist is put into action when a stack of Wilds appears on one of the middle reels on one of the grids. As a result, this will then duplicate on all other reels creating even more wins! To make the Stacked Wilds even more exciting, any wins generated will be randomly multiplied by x1 up to the max amount of x4 which you can monitor by the multiplier gauge in the top right-hand corner.

The Wild is represented by Cash Pump’s daredevil driver himself, who you will find drifting onto the reels. The Wild symbol contributes to any wins along a winning pay line, at the same time substituting for any symbol except a Scatter. 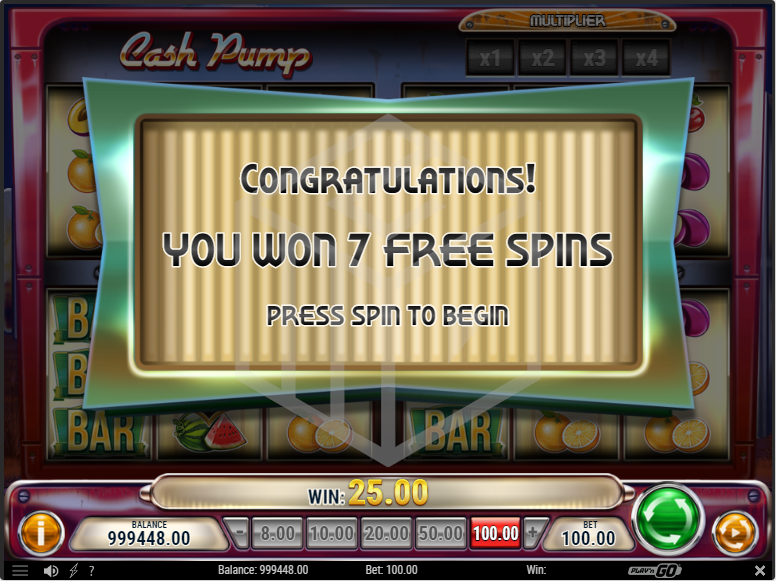 At the top of the pump, you will also notice a multiplier gauge. Collecting four Scatters will also increase the multipliers for stacked Wilds, starting with x1 and increase by one each time until the maximum amount of x4.

Our thoughts on Cash Pump

To sum things up, I have high hopes for this Play'n GO slot game and definitely recommend giving it a whirl. One aspect we slot enthusiasts love is the potential to land that ultimate big win, which this highly volatile slot game can do.  With great features and an added twist to the Stacked Wild feature keeps you sitting on the edge of the chair with anticipation. The use of classical symbols makes Cash Pump an easy slot to follow and play.

Are you daring enough to take a ride with the daredevil himself? Why not check out this new slot and see if you have what it takes to win 10,000 times your stake!