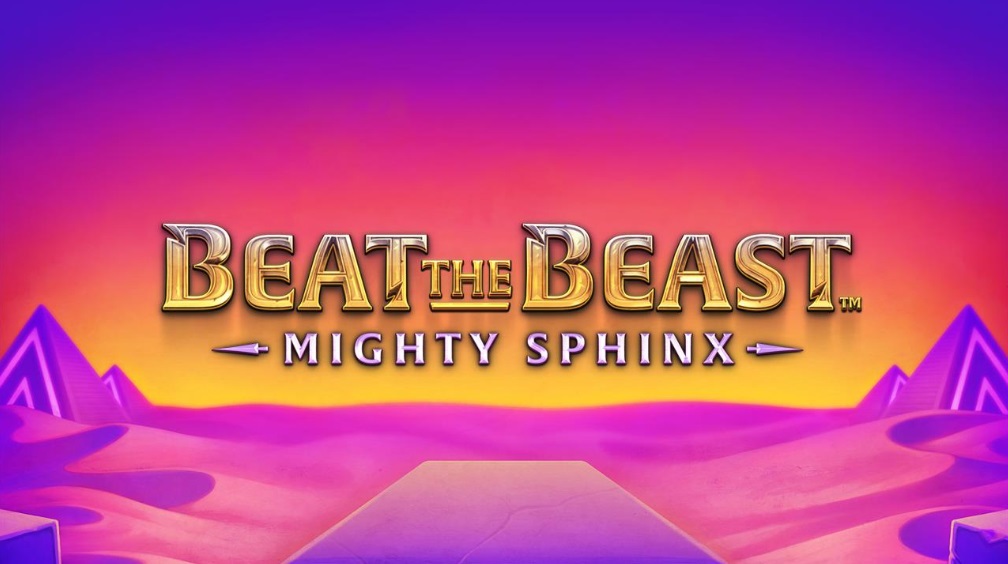 April 2020 sees the release of the second in Thunderkick’s Beat the Beast series of five “classic slots taken to a new thrilling level”. This time we’ve moved away from the deep blue sea of Kraken’s Lair to the arid climes of the Ancient Egyptian desert for instalment number two, Mighty Sphinx.

This highly volatile slots, as with its predecessor plays on a classic reel 5x3 reel set and 9 fixed paylines. Mighty Sphinx comes with a marginally higher RTP of 96.14% (compared to Kraken’s 96.12%), but a considerably lower max payout of 4,444x (Kraken’s is 7,777x).

Once again, the big wins come from a scatter triggered free spins round, this time with retriggers and wild upgrades.

If you’ve been awaiting the second in the series the first thing you’ll notice is that Mighty Sphinx looks very similar to Kraken’s lair in terms of board and overall design. Of course, the theme, colours and some of the symbols have changed, but side by side the similarity is quite substantial.

Rather than the rocky entrance to an underwater lair flanking the gameboard, with shipwrecks in the distance, we now have temple steps, and sand dunes, with pyramids in the distance. And of course, the aquatic blue has been exchanged for the deep yellows and burnt orange of the desert. The gameboard sits front and centre with reels carved brownstone. The gameplay is accompanied by a seductive and rhythmic soundtrack befitting the theme.

Before the start of any game up to 3 Sphinx Emblems (which act as both wilds and scatters) may appear anywhere on the reels. This can either trigger the bonus game, or at least increase the likelihood of a win and/or triggering the bonus game.

Three or more scatter symbols trigger the bonus game with 10 free spins. Between 1 and 3 Sphinx Emblems appear on the board before every free spin. Three or more scatters landing during the bonus game trigger an extra 5 free spins. A retrigger also turns one of the medium value symbols wild for the remainder of the round. With 4 medium value symbols, this can happen up to 4 times.

Our Thoughts on Beat the Beast – Mighty Sphinx

Mighty Sphinx is by no means a bad game; it fulfils the brief of being a volatile, classic game which will appeal to a wide range of players. However, it is just a little bit too similar to Kraken’s Lair to get overly excited about. It also has a lower max payout at 4,444x rather than 7,777x. This will of course mean that it will payout more during the base game, but I guess I was hoping for something meatier this time around. This isn’t to say I didn’t have fun playing it, and with the bonus not being especially hard to retrigger, the bonus spins can be quite enjoyable and profitable. Still, I’m hoping for something a little more adventurous from Thunderkick next time.