Following in a long line of Ancient Egyptian/Action-adventure slots, Quickspin’s October 2018 release ‘Ark of Mystery’ offers up a few new tricks for this old dog of a theme.

Ark of Mystery is no Book of Ra clone, and although it uses an ‘Indiana Jones’ type character as its hero much like Play‘n GO’s Book of Dead, Anna is more Lara Croft than Rich Wilde.

This slot has a 5x3 reel set with 20 fixed pay lines and operates with an RTP of 96.53%. This slot comes with a max win of 6,509x the bet size. That kind of win is only possible when employing both the game’s features; a wild respin feature and a win multiplier feature. However, this medium variance slot delivers plenty of base game wins with 57% of the games 96.53% RTP coming from non-feature related winning combos. 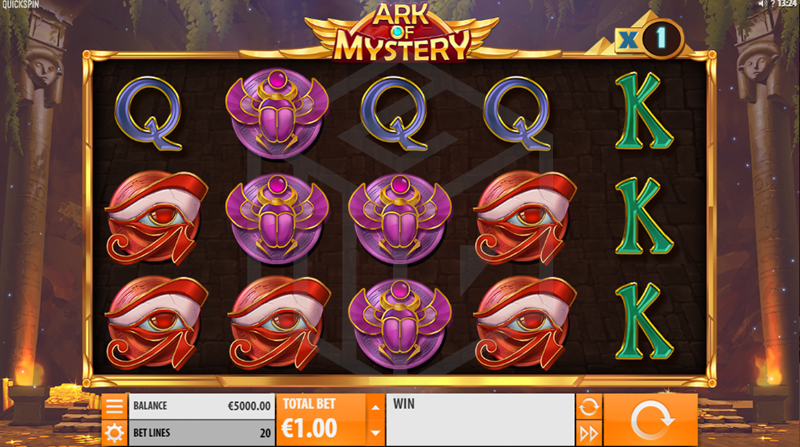 Quickspin has made a fine effort with Ark of Mystery, and the visuals stand head and shoulders above some of the very many slots which also occupy the Ancient Egypt theme space. The action takes place, as such games tend to, in the depths of some sort of ancient tomb. The tomb floor is littered with gold coins, usually a sign that it housed a member of the aristocracy. However, in this instance, it is sheltering something even more valuable, the Ark of the Covenant. For the uninitiated, the Ark is a wooden chest covered in gold which, according to the Book of Exodus, contains the two stone tablets containing the Ten Commandments. The Ark sits on a raised stone plinth in the centre of the tomb. The tomb is supported on either side by stone columns decorated with hieroglyphics. At the foot of the columns are burning torches while Pharaoh heads are carved into the heads of the columns. Green foliage sprouts from the top of the columns and across the top of the gameboard. The gameboard is a simple, gold-framed affair with a brick background and the game’s logo on top of the reels. The soundtrack is very much the kind of thing you’d expect to hear in an Indiana Jones movie.

Low-value symbols are the standard royals 10-A. Medium value symbols are Ankh’s, Scarabs and Eyes of Horus. Anna, the game’s heroine is the highest value symbol with 5 across a payline awarding 50x the bet size. The golden Ark is the wild which only appears on reels 2, 3, and 4, and the multiplier symbol which only appears on reel 5 is a white pyramid. All symbols can appear stacked on all reels.

An Ark symbol landing on reel 2, 3, or 4 activates the Wild Ark Respins feature. A respin is awarded, from which another Ark will land on the same reel as the first, in an adjacent position. A further respin is awarded which results in the final symbol space on the reel being filled with an Ark wild. If during the respins an Ark lands on another reel then the process is repeated. You can earn up to 6 respins and fill the three middle reels with wilds in this feature.

During regular play and respins, the Multiplier Booster pyramid may land on reel 5. If this coincides with a win the win multiplier will increase by 1x for each pyramid landed before the win payout is calculated. The current multiplier is shown in the multiplier counter at the top of reel 5. The multiplier remains in place during respins and can reach up to 22x in the Wild Ark Respins feature.

Our Thoughts on Ark of Mystery

Ark of Mystery is a fairly simple game with a couple of simple features. It looks good and it certainly has the ability to produce some decent wins. Furthermore, it is good to see a slot in this genre which offers something a little different to the norm, and one that provides regular, if unspectacular, payouts.

One question is whether or not it provides enough entertainment to draw in those who enjoy playing highly volatile slots of a similar ilk such as Book of Dead and Big Time Gaming’s Eye of Horus? There is certainly enough potential with a max win of over 6,500x possible. The lack of a free spins round is a bit of a gamble, but with a decent amount of action up for grabs with the respins feature it may not be that huge a gamble.

Ark of Mystery may not be a game-changer but hats off to Quickspin for trying something new to spruce up a well-worn theme. A worthy addition to a player’s portfolio.