Aladdin and the Sorcerer by Pragmatic Play released on 14.11.2019 is a 5-reel & 3-row online slot with 20 paylines and a 96.23% RTP. This is a Aladdin-themed game offering players a max win of up to 6250x their stake. Aladdin and the Sorcerer can be played on all devices from €0.2 to €100 per spin and is considered a high volatility game. 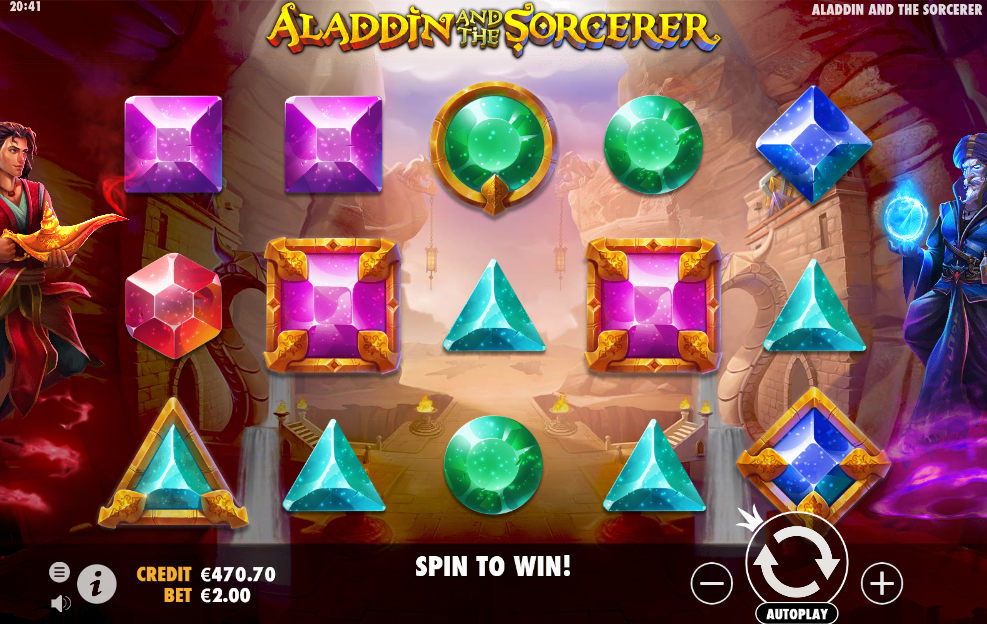 Comparing the visuals with this game and Pragmatic’s previous Aladdin themed slot is like looking at night and day. Pragmatic has come on leaps and bounds with regards design and animations in the past couple of years. In fact, you’d be hard pushed to find a Pragmatic Play game released in the past year or more which doesn’t have superb artwork. Aladdin & the Sorcerer is no exception. The game is set inside a cave entrance where Aladdin & the Sorcerer hover either side of the reels. The floating reels allow you to see through them to the paved pathway leading from the cave, passed the stone dragon’s guarding the entrance and out into the hazy, Arabian daylight. The hovering Aladdin to the left of the reels bobs up and down rubbing his shiny and shining golden lamp. The Sorcerer, dressed in blue, juggles a blue orb of energy from his position to the right of the reels – directly facing his young enemy.

The background scenery changes during the free spins round as the combatants are now facing off across the reels above the Arabian city at night with the large Imperial building dwarfing the surrounding buildings.

When an Aladdin or Sorcerer symbol lands it will produce between 3-6 random wilds scattered across the screen. When both symbols land on the same spin reels 1 and 5 go fully wild. This also triggers the Respin Battle Feature. 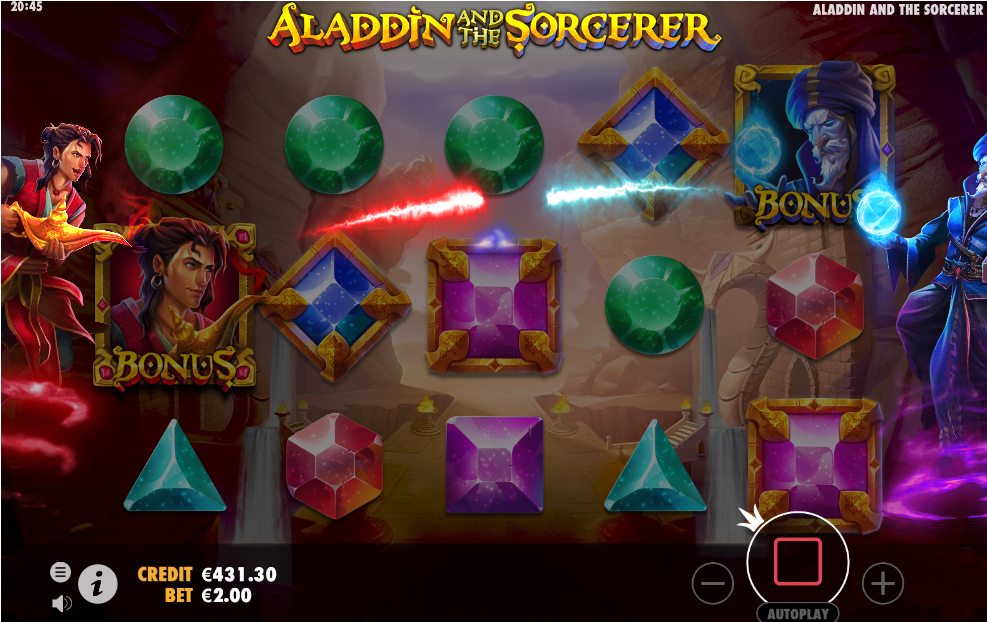 The respin battle feature is triggered when an Aladdin and a Sorcerer symbol land on the same spin. At the conclusion of the spin, the pair fire their respective weapons at one another and reels 1 and 5 turn completely wild. Once any winnings from these wilds have been accounted for, the respin battle begins.

Each player is given a health meter positioned above the reels with 3 health bars. Each time one of the symbols lands he fires a shot at his enemy and reduces his health by one bar. Also, as during the base game, between 3-6 random wilds are scattered across the reels. Reels 1 and 5 go fully wild if both symbols land on the same respin and no health bars are lost. Aladdin defeating the Sorcerer is the only way to trigger the second level of the respin feature, the Wild Multiplier feature. A win for the Sorcerer marks the end of the bonus feature.

Having safely navigated to the second level of the respin feature 3 more respins are awarded. The wilds which scattered from the final respins in level 1 remain locked in place throughout the 3 spins. The first spin is a standard spin. The wilds are given a 2x win multiplier for the second spin and a 3x win multiplier for the third spin. The bonus round ends after the 3rd respin.

Our Thoughts on Aladdin & the Sorcerer

Despite being quite light on features, I have to say that I really rather enjoyed Aladdin & the Sorcerer. The artwork and design are superb, the narrative is compelling, and the gameplay flows nicely. I also found the feature entertaining and capable of delivering solid wins. Actually, I think I must have had a fair amount of beginner’s luck as I found the hit rate for triggering the main feature to be quite a bit higher than I suspect is the norm.

The potential is also decent, with wins of over 6,000x possible. My one slight gripe is that there is no way of retriggering the bonus round. Once you’ve had your 3 level 2 spins the bonus round is over. It would be nice, however, remote the chances, if there was an opportunity to continue the round. Other than that, a good, fun slot.