If you enjoy a slot which offers a Bonus Buy feature then your looking in the correct place. Along with Acorn Pixie you can also find other bonus buy slots here. 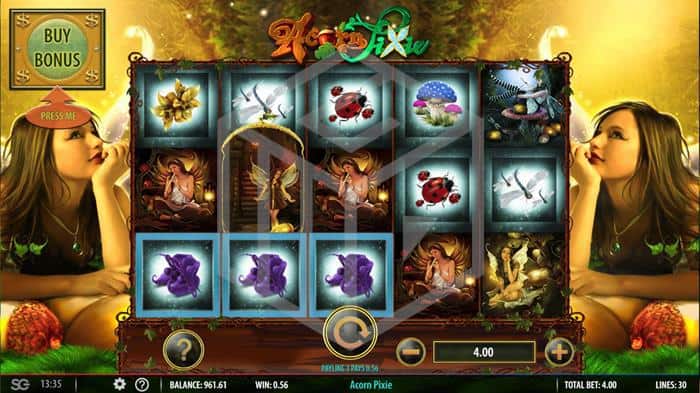 You can’t knock the artwork on Acorn Pixie as there has obviously been a lot of time and effort put into the detail of the background, characters, and symbols. The game board has a delicate wood frame entwined with ivy which sits on a wooden base. The frame is flanked either side by two large pixies lying on acorns resting their chins on the heel of their palms and gazing up at the hazy, glowing sky with the plumage of the enchanted wood behind them.

Including the wilds and the bonuses, there are 12 symbols in total. There are 6 lower value symbols including 3 flowers, a dragonfly, ladybird, and mushrooms with 5 pixies in various poses or activities as the higher value symbols. The kneeling pixie, which doubles as the wild, is the most valuable, offering 20x stake for 5 in combination. The bonus symbol is a pixie floating in front of a flight of stairs.

The base game benefits from a random cluster wild feature with the main bonus being a free spin round. There are also three different price points to enter a ‘Buy a Bonus’ round.

This occurs randomly during the base game and takes the form a 2 x 2 wild symbol appearing anywhere on the reels which can lead to some decent wins if it lands in the right place at the right time. 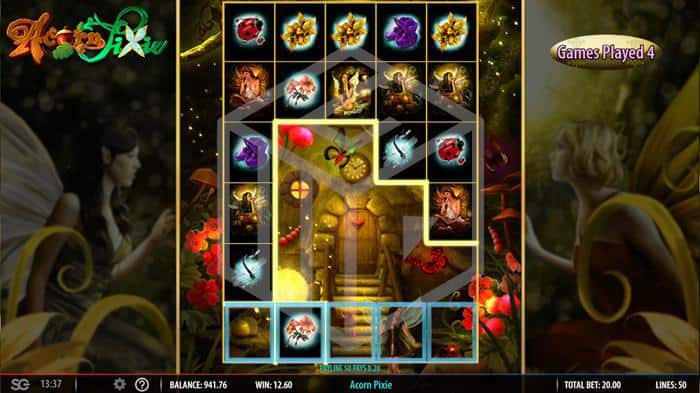 The Acorn Pixie bonus round is triggered by landing the scatter symbol on reels 2,3 and 4 and awards the player 7 free spins on a new board 5 x 6 board with 50 pay lines. Throughout the spins, sticky wilds will appear, starting with one in the middle of the bottom row then adding spin by spin to adjoining wilds, often adding several new wilds at a time. As the wilds start to fill the board they start to reveal a woodland scene in the background. The wins are smaller in the bonus game and the real benefit starts to become apparent in the later spins after more and more wilds have landed when the significantly more valuable 4/5 combos start landing. 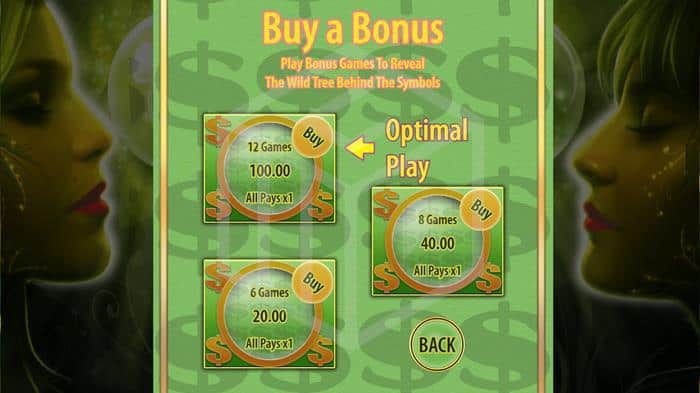 I have mixed thoughts on Acorn Pixie; on the one hand, it is a pretty looking game and the bonus round can be entertaining as you accumulate those sticky wilds. However, overall there are just too many areas in which the game didn’t really cut the mustard.

Firstly, although the symbols are pretty and well animated, they are rather small and unfamiliar (10 – A might be boring but there’s no mistaking them on the reels) and this becomes a problem, especially when you enter the bonus round when the size of the reels and symbols diminish, and even more so if you’re playing on a mobile device where they are often almost indistinguishable!

Also, the fact that the game pays for any 3 or more symbols left to right and there aren’t stacked reels makes picking out a win during the bonus game almost impossible – especially when the wilds add up. Not a big deal, but for me, it meant that I didn’t feel as engaged in the bonus round as I couldn’t make out what was really going on. I also found it frustrating that the number of spins was limited to just 7, with no way to trigger further spins.

I also wasn’t keen on the buy a bonus round here as the wins were just too small. The first few wins are extremely small, with only the last 2-3 really bringing any decent wins. The ROI isn’t bad and it’s not unusual to make your money back, but the volatility on this feature is just too low – you may not lose much but extremely rarely will you win much either. Personally, I think the whole point of a “Buy a Bonus” feature is so that real gamblers can take a punt at a big win – and Acorn Pixie’s is just too pedestrian.

Finally, and I hate to keep up with the negativity, but the ROI is just too low. A mere 92% for the standard game is extremely poor and 96% for the buy a bonus round may be average as far as a normal slot ROI is concerned, but it’s still low compared to other slots offering the opportunity to buy straight into a feature.