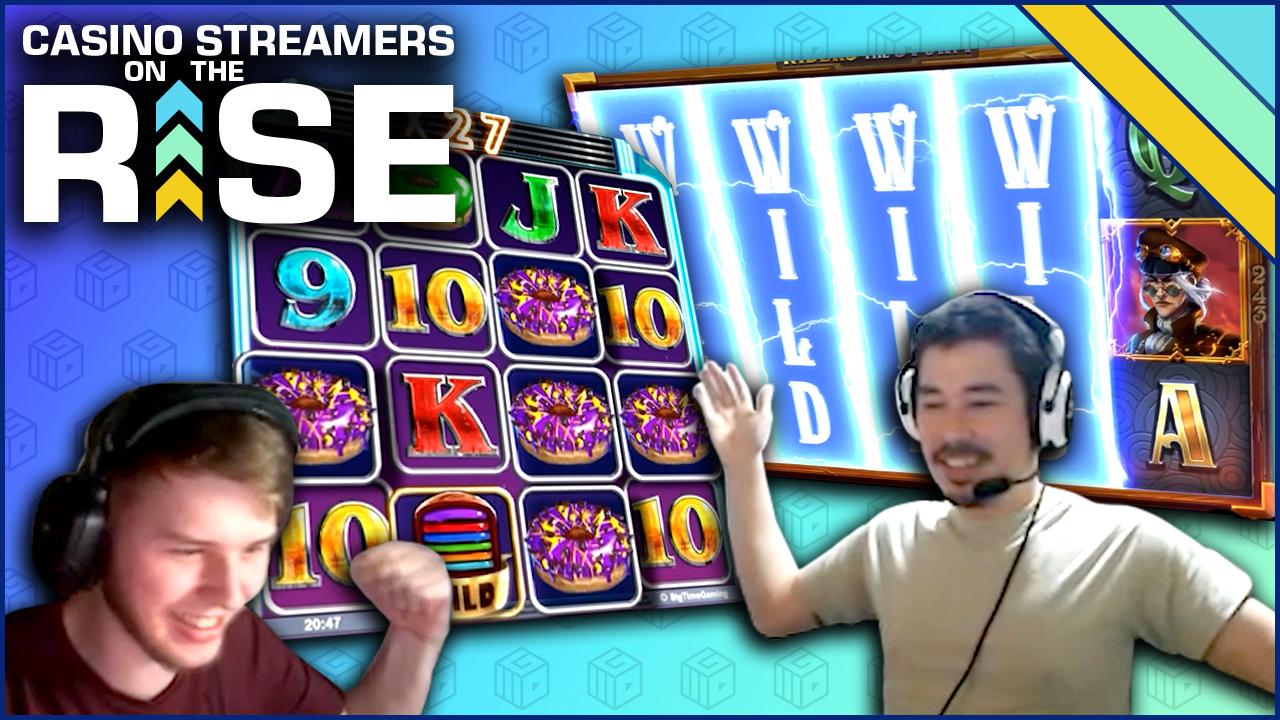 Top Up and Coming Streamers – Volume 9

At CasinoGrounds we’re always on the lookout for fresh talent, either to join our roster of streamers, or just to showcase recent streamers we’ve found entertaining and who we think you might enjoy watching. Check out our latest recommendations below reaping the rewards of sticking to the grind. In our 9th ‘Up and Coming Streamers’ compilations we have players from the UK, Germany, Canada, Australia, and the United States. Also featured in the video are games by Thunderkick, NetEnt, Blueprint Gaming, Big Time Gaming, Relax Gaming, and Play’n GO.

WatchGamesTV isn’t exactly a novice as a streamer to be honest, something his nearly 50,000 Twitch viewers (and his 323,000 YouTube viewers) could attest to. However, Canadian streamer Ibrahim Zekerie, is better known for his CS:GO videos than his slots escapades but has recently been spending a little more time spinning the reels.

WatchGamesTV stars in our first clip, playing Thunderkick’s superb Riders of the Storm at CAD $10 a go. The win comes from a base game spin when the Mystery Wild Reels feature randomly activates. This feature turns up to 4 reels full wild, and in this instance WatchGamesTV is treated to the maximum 4 wild reels, and it’s the first 4 reels which turn wild. The final reel contains a Q, and an A which sandwich the game’s highest paying symbol (The Patriarch Captain), which results in a win of $17,820 (1,782x).

MillarSlots is a UK streamer who picked up the bug for slots just over a year ago after a particularly nice 5,000x win. Since then he has slowly been gathering a small but steady following, with almost 600 twitch followers. Playing one of Play’n GO’s Book of Ra clones, ‘Doom of Egypt’, MillarSlots triggers the all-important free spins bonus, where he is randomly assigned Anubis, the highest paying symbol, as his special expanding symbol. Anubis ends up doing rather well for our novice streamer here. On his 3rd spin, he lands fully expanded Anubis symbols on reels 1, 3, and 5 and wild symbols on the middle row on reels 2 and 4 for a £90 (225x) win, followed by 4 fully expanded Anubis on spin 5 for a £400 (1,000x) win. In total, a jubilant MillarSlots pockets £491.20 (1,228x) from his £0.40 bet.

Ozhunt is an older Australian gentleman (well, older when compared to your average twitch streamer, but not ancient – so no offence Ozhunt), who likes a beer, a laugh, a swear, and a punt on the slots. With over 1.6k followers on twitch, it seems that others are starting to also enjoy his affable nature and love of slots. In this clip we see him playing Thunderkick’s Midas Golden Touch in the free spins feature. In this feature, winning combinations turn sticky and remain in place as long as more symbols land in place so as to create more or better-winning combinations. The Golden Hand is not only the wild during free spins, but it also acts as a win multiplier with each Golden Hand adding a 2x win multiplier.

Ozhunt, playing at AUS $5 a spin ends up with 20 total free spins after retriggering more free spins during the bonus round. He also picked up several decent wins including a full line of the highest paying Midas symbol with a 2x win multiplier. In total he managed 2 beers, a dozen swear words, and a win of $2,077.50 (416x)

Dumbros are a pair of fledgeling streamers and CasinoGrounds forum members from Canada, and here we find them in the bonus round of Relax Gaming’s superb Money Train. Playing at Dream Vegas casino for $0.60 a spin, the Dumbros get off to an insane start, landing 4 special symbols on the very first spin. The 2 widener symbols add an extra two reels to the gameboard, thus creating an additional 8 spaces to potentially fill with win multipliers. The two collector symbols each collect all the win multipliers already on the screen and add them to their own win multiplier. Just two spins later another collector lands, adding 63x to the winnings. Win multipliers continue to rack up (you have to land at least one winning multiplier in every 3 spins to continue to play) until 15 spins and several win multipliers later, ANOTHER collector adds 156x to the total winnings. On the very next spin another TWO collectors land, adding 316x and 631x respectively to the win. The round eventually comes to a close with all but three of the 28 symbol spaces filled with multipliers or special symbols for a total win of $758.40 (1,264x).

Jeyweyyt is a German streamer with 500 followers who have been putting out some decent slots content of late. We join him playing one of Big Time Gaming’s highly volatile hits, Donuts, where he is playing for €0.50 a spin at Platin Casino

After landing 3 bonus symbols Jeyweyyt goes to the win multiplier round where each donut which lands adds a random win multiplier to every free spin. Jeyweyyt ends up with a 26x win multiplier added to each of his 12 free spins. It looks like a disappointing bonus and going into his final spin Jeyweyyt has only won €18. However, that final spin brings a retrigger, and the next spin adds another retrigger, giving him a further 20 free spins and another win multiplier, pushing that up to 27x. The big win comes 5 spins into the second set of free spins when a purple donut lands on reel 1, a wild on reel 2, three purple donuts land on reel 3, and another land on reel 4. This single spin results in a €607.50 (1,215x win). In total, the free spins bonus round earns Jeyweyyt €677 (1,354x). There weren’t too many English words in there for me to understand, but his final offering of “Holy Fuck!” is one I’m pretty familiar with…

Ogsmashers has just under 200 twitch followers and is also a CasinoGrounds forum member who posted this win to our forum last month. Playing NetEnt’s one payline progressive jackpot slot, Grand Spinn Superpot at €4 a spin, Ogsmashers lands three 2x wild symbols for a €320 win. In this game three on the payline awards a nudge, if the nudge brings in the same symbol, the win is added again. This continues until the last consecutive matching symbol lands. Then the same thing applies to both reels 2 and 3 on this 3 reel slot. On this occasion multiple 2x symbols land on each reel, eventually bringing the win all the way up to €9,600 – a win of 2,400x the initial bet size. It says on the forum that this was only Ogsmashers 5th spin on the slot! Talk about beginners luck!

ChargerX666 has already established a decent following of over 4.5k on twitch, and in this clip, we see him let fate decide his free spins fortunes and he is lucky enough to be randomly awarded 15 free spins with a guaranteed 10,000 Megaways each spin whilst playing Blueprint’s Temple of Treasures Megaways at $1 a spin. Things get even better just 2 spins later when a retrigger adds another 5 free spins to his total. The wins don’t come in thick and fast, but the win multiplier creeps up to 13x by the 10th spin when a huge hit lands. Two bonus symbols link with 7 mystery symbols across the 6 reels. The mystery symbol reveals itself to be the game’s highest paying symbol which results in a single spin win of $3,926. ChargerX666 keeps on trucking, eventually getting that win multiplier up to 34x. He also enjoyed a couple of three-figure wins along the way to finally finish the bonus round with a win of $4,518, a win of 4,518x his bet size.