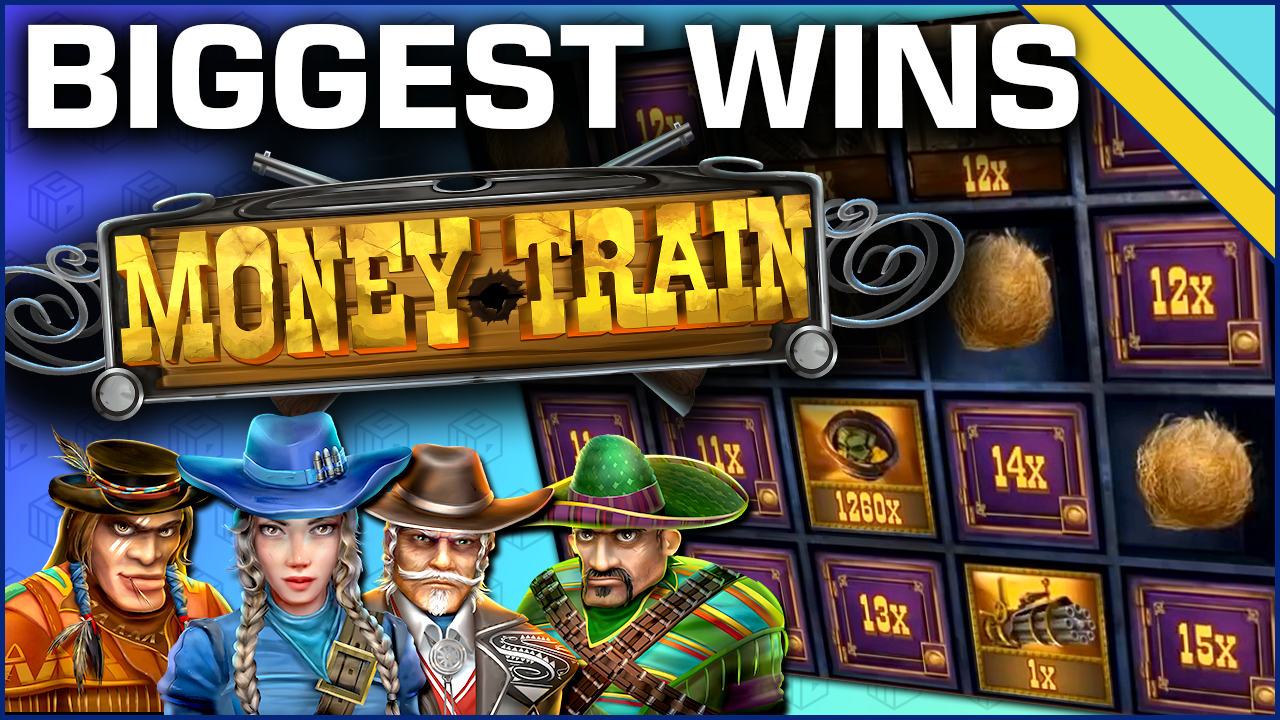 Today’s compilation video is all about Relax Gaming’s sublime video slot release from August 2019, the Wild West smash-hit, Money Train. With wins of up to 20,000x and some superbly innovative features, Money Train was deemed good enough by you, our loyal CasinoGrounds fanbase, to be voted in to the hallowed top 5 slots of the year for 2019.

For the uninitiated, you may want to check out our review of Money Train, just so as you can follow the action with a little more clarity, although I’ll endeavour to give you a good idea in my review of the top 10 below.

Our first clip features CasinoGrounds end boss LetsGivItASpin playing at €5 a spin when he triggers the game’s bonus round, “The Money Cart Bonus Round”. This is where you’re going to be seeing all of the action from this compilation.

To win big in this round a player must land as many sticky purple win multiplier symbols as possible until they run out of spins or fill the board. The reels during the Money Cart Bonus Round only contain purple win multipliers, 6 special symbols, or tumbleweeds. The tumbleweeds are the only non-winning symbols, with every other symbol adding wins multipliers to your win in one way or another. Winning symbols all remain sticky throughout the remainder of the round, although unless they are special “persistent” special symbols, they only pay out once.

Next up is popular streamer, Mitaaspins, who is playing at €0.50 a spin and opts to buy straight into the game’s bonus feature, The Money Cart Bonus Round for 80x his stake.

During his bonus round Mitaaspins lands 2 ‘Widener’ special symbols which add extra reels to the board to reach the maximum 7x4 board size. He also filled all but one of the 28 symbol spaces with multipliers or special symbols. Along the way he had some fine luck with the special symbols, landing a ‘Persistent Payer’ symbol early on and 3 ‘Collector’ symbols throughout the round. For the uninitiated, a Persistent Payer symbol adds its own multiplier value to all symbols for every remaining spin. As previously explained, a collector symbol collects all the visible values on the screen and adds them to its own multiplier value. As you can imagine, the later ‘Collector’ symbols got to add ever growing total values to their own values as the Persistent Payer had been showering multipliers across the board for some time.

By the end of his bonus round, Mitaaspins had collected 2,251x in multipliers for a total win of €1,125.

Popular Finnish streamer Miikkapekka takes the number 8 slot with another Buy-a-Bonus effort. Playing at €1 a spin, Miikapekka stumps up €80 to buy straight into the Money Cart Bonus Round.

Miikapekka gets off to a flying start, and within the first 8 spins he has already opened up both additional reels courtesy of two widener special symbols as well as landing a payer and 4 collectors for a win which is already well over 500x. The next few spins bring 2 more collectors which add over 1,600x between them. Finally, before the round ends with just 2 of the 28 spaces without a winning symbol, two more payer symbols land, adding more multipliers to every multiplier already on the screen. Miikapekka’s total win from the round reaches €2,312 (2,312x).

Sent in by forum member, Luficiel Gaming, we don’t get to see much of this win played out on a mobile device. Playing at €0.30 a spin, the board has already been widened twice to the full 28 symbol capacity and has 2 payers, a huge 7 collectors, and just 3 blanks left on the screen. The win is up to 6,954x. Only 1 more multiplier of 1x is added from the 3 spins we see, making his final win 6,955x (€2,086.50), and over half of that came from the final collector symbol which added 3,473x to the total.

CasinoGrounds streamer Daskelelele is up next with a scorching win playing, at €5 a spin. Daskelelele’s first bit of luck comes on spin 3 when he lands a ‘Persistent Payer’ symbol. Over the next 4 spins, as well as a few more multiplier symbols, he also lands two widener symbols. These symbols unlock the two additional reels, increasing the number of symbols spaces to the maximum 28. On the very next spin Daskelelele adds a ‘collector’ symbol which adds up all the win multipliers currently on the board and assigns this number as the symbol’s win multiplier. Best of all, however, he also lands a ‘Persistent Collector’ which adds the total number of win multipliers on the board to their own value after each spin. As there is also a Persistent Payer and a collector on the board, this number increases each spin. This gets even better a few spins later when a regular Payer symbol with a 3x win multiplier lands, adding 3x to every symbol on the board, meaning the Persistent Collector is now adding many more win multipliers to its value as long as winning symbols continue to drop. When the round finally ends, there are 22 winning symbols on the board and a grand total of 8,483x for the bonus round, a win of €42,415. An excited Daskelelele confirms that it was his biggest win ever.

Another CasinoGrounds streamer takes 4th spot as Gamble_Gangsta buys straight into the Money Cart Bonus Round at the €0.50 stakes for €40. This round doesn’t last nearly as long as most the others on this list, but due to landing two persistent payers the win increases exponentially with each spin. Although the persistent payers only came with multipliers of 1x each, as they add their own value to each other on every spin, those 1x multipliers quickly escalated. In fact, they were only on the board together for 6 spins, by which time they had accrued values of 233 and 377, while other multipliers on the board were showing multipliers between 612x and 621x. The total win came in at a huge 9,202x the bet size (€4,601).

The bottom line here is that by the end of the bonus round Xtremeg222 has a ton of multipliers with huge values leading to a staggering €9,464 (9,464x) win.

We only get to see the final spin here, but what we do see is a very impressive sight. Playing the bonus round of course, Jani has managed to unlock all the additional bonus reels and fill all but 1 of the 28 symbol spaces with win multipliers. Among those win multipliers are 11 special characters, some of which have win multipliers, including one of over 8,200x. In total Jani’s win reached €8,270.50. Playing at €0.50 a spin that makes a win of 16,541x his original bet size.

Won just a couple of months ago, this huge score goes to forum member Philconners from a €0.17 bet. Unfortunately, we only get to see the win being counted up, but our video editors have zeroed in on the actual win amounts across the Money Cart Bonus board and they are just insane. The wins had been massively helped along the way by virtue of Philconners landing 2 Persistent Payer symbols as well as 2 regular payer symbols. If you look at the ridiculous win multipliers across the board, they actually add up to a win of 37,378x. However, unluckily for Philconnors, the slot’s maximum possible payout in only 20,000x so the win of €3,400 could have been €6,354.