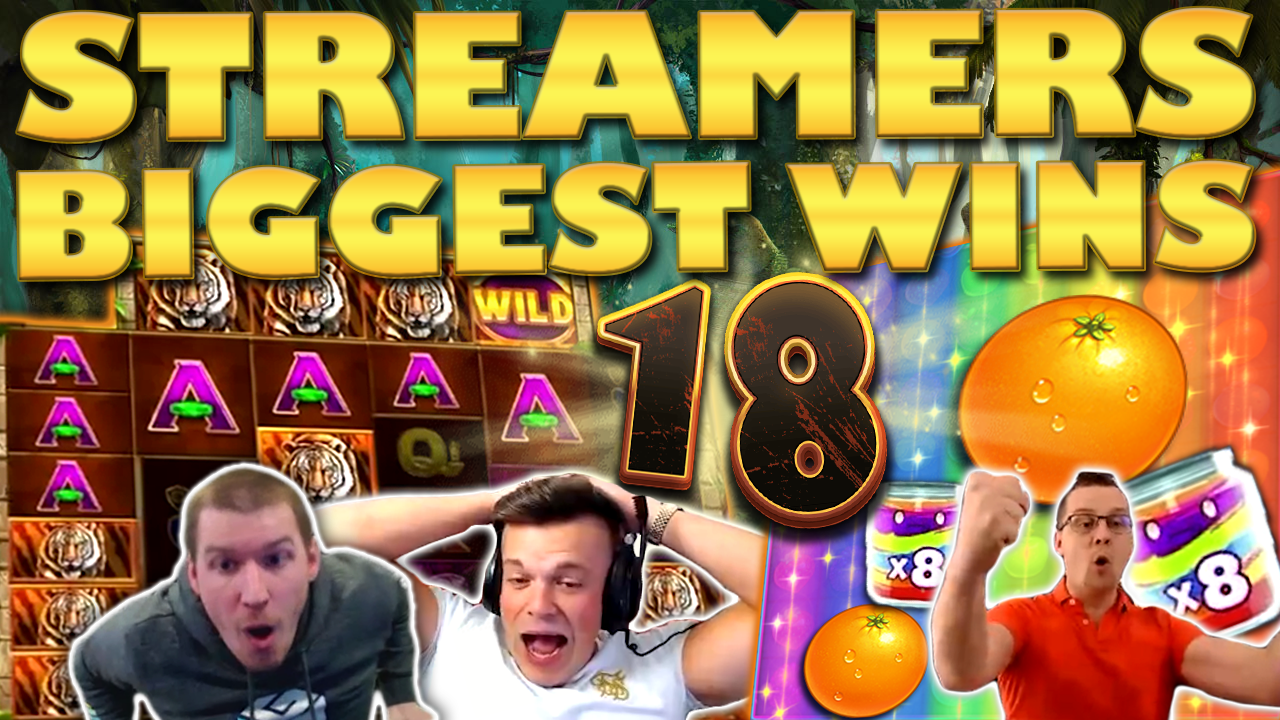 This is going to be a long one! Today’s video compilation boosts both quantity and quality. Hence, we have eight big wins from some of the most popular casino streamers at the moment. Each one features an impressive hit, on a particular slot machine. Moreover, there is also a lengthy bonus clip at the end. - It shows what might probably be the best ever win on Monopoly Live. Therefore, sit back and enjoy.

It’s Jammin Jars that gets the ball rolling today. This popular Push Gaming title gives two seperate wins on two different slot streamers. First there was Nickslots making big £10 bets, at Rizk casino. His hit is particularly impressive due to it being in the base game. Nick landed a pair of wild scatters, which kept making winning combinations. Thus, their multiplier was going higher and higher. It was during this time that the random feature also activated. Therefore, a colossal fruit symbol landed on screen, and merged with the two wilds. As a result, a £16600 payout for our streamer. Jamjarboy’s hit was surprisingly similar. He too was trying some big bets of €10. However, it took the free spins for our streamer to get his win. During this bonus, four wild/scatters helped Jamjarboy end up with a huge €11000 reward.

Next we take a look at three more big wins. Two of them are on relatively new slots, while the third is on an old classic. Hence, we begin with the latest title, which is Euphoria from iSoftBet. We rarely see games, from this provider, featured on our compilations. Euphoria has quite the potential, mostly thanks to its unique multiplier feature. SlotVLT Mike’s 1463x the bet win, on it, showcases this slot machine perfectly. Moreover, if you want to try it yourselves, you can access it at Vera&John casino. The second hit comes from DeluxeCasinoBonus, during a bonus round on the Dance Party slot. Granted, this Pragmatic Play game came out in February, but I would still consider it kind of new. Now as for the win itself! - We know that on Dance Party the multiplier increases, by one, after every spin. Therefore, you need to get lucky towards the end. DeluxeCasinoBonus was very much so, as he got an 1209x the stake win. Lastly, the classic slot is Danger High Voltage. Not much we can tell, that you already don’t know, about Danger. Suffice to say that Gamble_Gangsta got three wild reels, during the gates of hell bonus feature. Hence, plenty of re-triggers and extra spins. - My only surprise is that he did not win more.

He is back! After his spectacular win last month, the Bandit returns with yet another amazing hit. This time it was on the new Gorilla Gold Megaways. The game has only been out for a couple of weeks, but already there are multiple players and streamers getting quite the payouts from it. Case and point, the Bandit landing a massive 2754x the bet, during the bonus. As always, it’s the reactions and commentary, for the streamer himself, that makes this clip so much more entertaining. On the other hand, for Casinohoppers2019 is was the base game that did the trick. We have said before that Primal Megaways is one of the few slot machines where the normal game is more rewarding than the free spins. - Hopper’s one hit wonder, of 1800x the stake, just reinforces that idea.

The two best wins of this compilation are almost identical in correlation to their respective bet sizes. Therefore, the new streamer Nex_199 brings us the third, and last, Jammin Jars win of today. He gets an absolute monster hit of 9553x the stake. Finally, the bonus clip at the end features probably the highest win we have ever witnessed on Monopoly Live. The streamer “iReflex” was kind enough to share with us hit gigantic 9600x on the game. Honestly, I can’t decide which of them I like more. How about you? Tell us which win on Casino Streamers Biggest Wins – Week 18 of 2020 was your favorite. Also, make sure to check our other videos on CasinoGround’s YouTube channel.