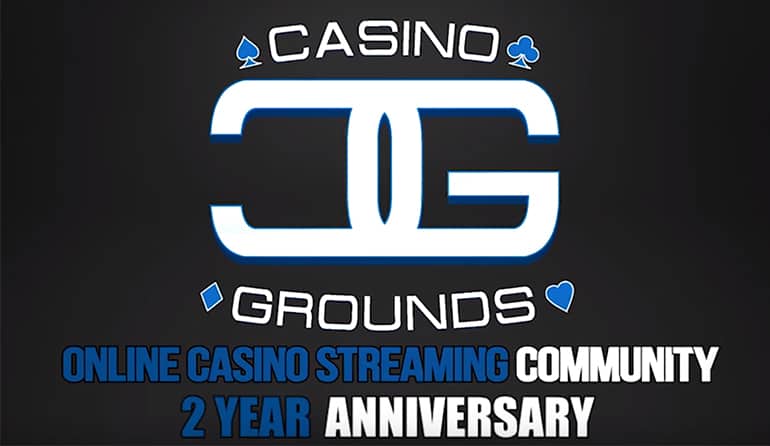 Recap of the CasinoGrounds 2 Year Anniversary

Our second anniversary has now come to pass, and we’re happy to now be able to share the highlights from this fun-filled event.

Followed by our CasinoGrounds Poker Tournament the day after.  We saw some proper poker action, and a few fish moves as well. – the fishiest of them all being the full-house fold by Huggehug vs Letsgiveitaspins’ bluff. The heads-up final was letsgiveitaspin vs slotspinner. Slotspinner hit the flush on the turn, and letsgiveitaspin took him all-in on the river, literally handing over the win to slotspinner. Those who guessed the correct winner received a seat to our very own CasinoGrounds 1k Guaranteed Tournament hosted by Guts.

On Wednesday, our streamers went on a full bonus hunt, gathering up bonus rounds from several slots, and then playing them out as they go. – We saw some pretty sick winnings this day, with the biggest win by Smackdowncasino with a whopping 1200x win on 300 Shields!

During the Weekend we handed out giveaways left and right, where the most interesting were two packages to join our Viewers’ Party on June 2nd.

We rounded off the week by chasing the Super Monopoly Money Mega Bullet together with LetsGiveItASpin, Slotspinner, Slotplayer and Nickslots. Nothing major was hit though, and the biggest multiplier we hit was a 5x.

Thank you to everyone who participated in this awesome week! We would not have had so much fun without you. Remember to get in on what’s going on in our community and stay up to date with our news